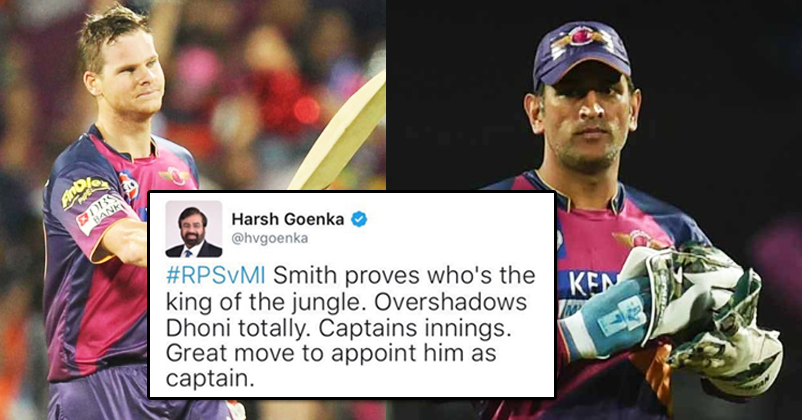 Cricket lovers are quite happy as the tenth season of IPL has started but every Indian cricket fan is a little upset with the fact that for the first time in IPL, M S Dhoni is playing as a player and not as a captain. However, for most of the Indians, whether Dhoni plays as a captain or a player, he will always be their Captain Cool and they are happy that he is playing at least. MSD is playing for Rising Pune Supergiants (RPS) which is being led by Australian player Steve Smith. The start in IPL for Rising Pune Supergiants was superb as they defeated Mumbai Indians by 7 wickets in their first match. Steve Smith and Ajinkya Rahane played important innings with bat as Steve scored 84 not out of 54 deliveries while Ajinkya played 34 balls to score 60 runs. Undoubtedly, Steve played brilliantly and led from the front as a good captain but what Harsh Goenka, brother of Sanjeev Goenka (owner of RPS) did was completely unacceptable. Harsh praised Steve, which was obvious, but showed disrespect to Dhoni when he tweeted, “Smith proves who’s the king of the jungle. Overshadows Dhoni totally. Captains innings. Great move to appoint him as captain.” No Indian cricket lover can accept this and Twitter just got berserk and slammed Harsh Goenka mercilessly for his insensitive tweet. Check out few reactions:

Did anyone hear Steve’s name?

Looks like @hvgoenka didn't like the Dhoni Dhoni chants in Stadium today. Ha ha, You have to live with it this season too #MSDhoni

You need a reality check:

In your dreams… No batsman can overshadow Dhoni. Take him out your team and see the fan count.. maybe you will get to know the reality

Dhoni is the backbone of your team:

Remember Goenka #MSDhoni is the Backbone of your team.. there are 11 players in your team, still the crowd chanted Dhoni Dhoni.💪#RPSvMI

A useful piece of advice:

@hvgoenka disrespecting #MSDhoni to praise Smith's inning is disgusting. don't forget there are 13 more matches to go for pune! #RPSvMI

The team is nothing without him:

Sir without @msdhoni @RPSupergiants is nothing

We follow the team due to him and not Smith

Take your comments back sir#brainfade #dhoni

Learn to praise without disrespecting:

If #MSDhoni Scores More Than Steve Smith In Next Match, Will You Make Him Captain Again?You Can Praise Without Disrespecting.Better Learn It pic.twitter.com/L9ljJOvPiJ

The brutal thrashing on Twitter made Harsh Goenka realize his mistake and he not only deleted his tweet but also apologized. He wrote, “I agree with you, Dhoni is a star. Has led India to glory. And the whole nation including me consider him my hero.”

There is no doubt that MSD on field must be a big help for Steve:

And after getting his conscience clear, Harsh had a sound sleep:

We think he must have learnt that MSD lives in the hearts of Indians.