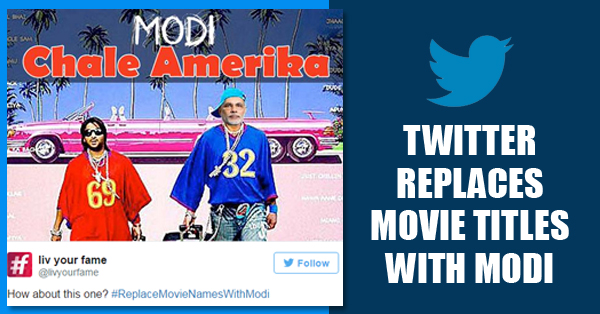 Prime Minister Narendra Damodardas Modi or NAMO or MODI has turned 65 Years old today i.e. 17th September 2015. Modi who was 3 times elected Cheif Minister of Gujrat and senior leader of the Party was elected as the 15th Prime Minister of Independent India. From a Tea Seller at a Rail Way station to the Prime Minister of India, his life story is filled with numerous Inspirations with which one can achieve their goals in their life. Prime Minister Modi in a short span of 1 year had changed the way world looked at India. He with his continuous hardwork and efforts to make communications with the World Leaders became a popular face everywhere and is now part of the World Leaders.
So on this day of his 66th Birthday twitter surprised him with a trend – “REPLACE MOVIE NAMES WITH MODI”. This trend saw thousands of hilarious tweets in which people replaced movie names with MODI. Have a look at these funny Movie names after they got replaced with MODI.

#ReplaceMovieNamesWithModi My Name is Modi. (And I am not a Terrorist :P)@livyourfame

#ReplaceMovieNamesWithModi whether u like him or dislike him he's gonna blow the opposition into tiny pieces. pic.twitter.com/5hB15zlyMi

Holiday: A PM Is Never Off Duty #ReplaceMovieNamesWithModi

My Name Is Modi

and I'm the PM dude #ReplaceMovieNamesWithModi

The fault in our Modi. Is there any? #ReplaceMovieNamesWithModi

Funny Right? 😀 Now come up with your own movie titles and replace them with MODI and comment in the comments box below. Lets see who gets the funniest Movie title. Also SHARE & SPREAD this post.