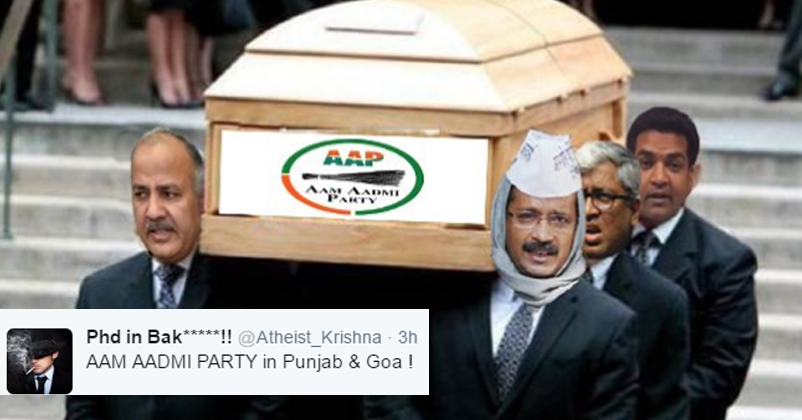 The election results of 5 states are almost out now and it is clear that Aam Aadmi Party is nowhere near to make government in Punjab. Before the elections, it was speculated that the fight is going to be tough between AAP and Congress but after the results, it can be seen that there is a huge gap between the numbers of seats won by each party. Congress is in a comfortable position in Punjab and very soon, it will be making its government. However, these results once again gave a chance to Twitterati to troll the New Delhi Chief Minister Arvind Kejriwal as he led the campaign aggressively in Punjab and said that AAP would make government in the state. Arvind Kejriwal has a good number of haters on Twitter and most of them are always accusing him of not doing any work except reviewing movies.

Twitterati trolled him mercilessly after the Punjab results and here are few selected tweets:

Arvind Kejriwal before & after election results:

Kejriwal is a true ENGINEER
He was overconfident after giving the exam
Now after results he's like 👇🏻👇🏻👇🏻👇🏻👇🏻👇🏻👇🏻👇🏻👇🏻👇🏻👇🏻👇🏻#ElectionResults pic.twitter.com/Bf3lkas1sG

The condition of AAP after results:

So this is what EVM stands for.. LOL 😀

EVM – Everyone Vote for Modi.

It may work.. What do you say?

Rejected from a state where drugs are plenty #Punjab

Rejected from a state where alcohol is plenty #Goa

Delhi, what were U high on?

Angry by his performance in Punjab, Kejriwal burning his own IIT degree. #ElectionResults pic.twitter.com/GHLbaMf5dJ

Hilarious, aren’t they? How did you find these tweets? What is your take over the matter? Share your views in the comments section below.

She Married 72-Yr Old Man For Money But Now She Has Divorced Him For This Silly Reason
Rishi Kapoor & KRK Took A Jibe At Kejriwal & Akhilesh! It’s So Brilliant That Even They Need To See It