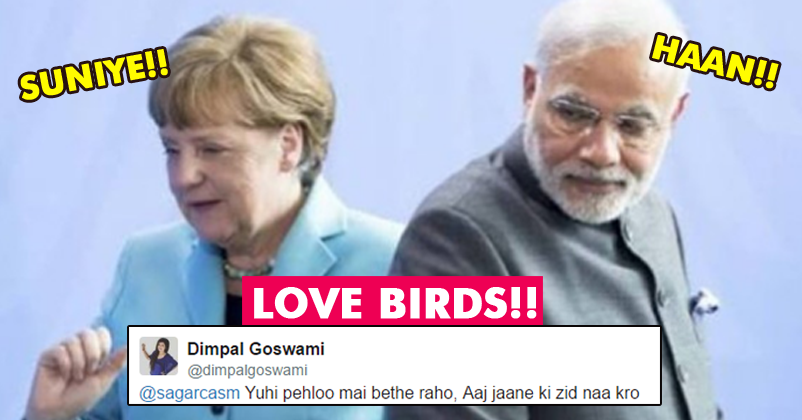 Twitter has turned to be a great place for entertainment and controversies. From hilarious trolls to people getting banned, it’s a one-stop destination for entertainment. Recently, a caption game has become a trend on Twitter, and people are responding to it in great numbers. Today, we have a series of such tweets where Twitterati took on PM Modi and Angela Merkel (Vice Chancellor of Germany). Read the complete article to see the fun.

PM Modi recently visited Germany and met Angela Merkel during her electoral rally. During his brief visit, Modi worked on bringing India-Germany relationship closer. Reports stated that they talked one-on-one on issues of Germany which included regional and global issues like climate change, problems regarding Afghanistan and terrorism. Several pictures of the two appeared on social media. But one of these pictures is creating a lot of commotion on the internet. This reached a new height, when a Twitter user decided to play the caption game with this image. The captions that people came up with are so funny that you will definitely go ROFL! We have collected some of the tweets. Scroll down and enjoy. 🙂 And from here you will see the epic captions which are damn funny.

4) No dear! He needs to visit other places.

5) That’s what I call feelings.

8) Best proposal of the year?

This list continues. We have collected the best ones for you. Do let us know if you like them.

Dhinchak Pooja’s FB Page Teaches Real Meaning Of Confidence & You’ll Love Her For This
After 3 Years Of PM Modi, Here Are 10 Questions That Every Indian Should Ask The Government!