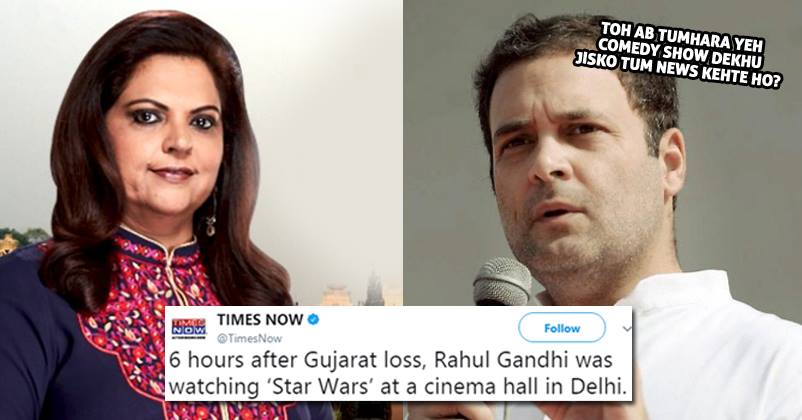 The election results of Gujarat and Himachal Pradesh are out and the governments will be formed by BJP in as they have attained majority in both the states. BJP did face some difficulty in Gujarat elections and they have got fewer seats this time in comparison to the last year and they will soon analyse the reasons behind it. We will get to listen to these analysis on news channels for a week and then election fever will subside down gradually until the next elections.

But Times Now was quite worried about the fact that just six hours after losing Gujarat and Himachal Pradesh, the Congress President Rahul Gandhi has gone to watch an English movie entitled “Star Wars” in a Delhi cinema hall. 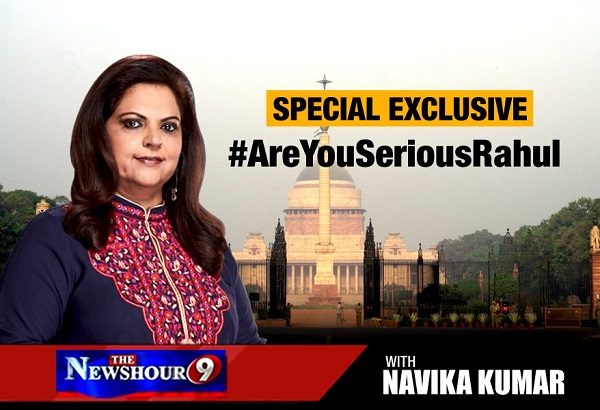 Twitterati wasn’t happy with it and they trolled the news channel left and right. Here are some of the selected reactions:

Pulitzer worthy stuff from Times Now. Love the way they're making fun of their own editor Rahul Shivshankar with the hashtag #AreYouSeriousRahul https://t.co/PArqBWSYv1

So @TimesNow & it's anchors want Rahul to become a non-human robot like themselves, at their master's service 24/7, ever willing to destroy public discourse for crumbs from those in power. Totally sickening @vineetjaintimes. Your 'boys' have brought journalism to an all time low https://t.co/PlzwbTylaa

And I swallowed a tub of Baskin Robbins after a bad exam, what is your point Times Now https://t.co/ORyOXzTg1H

The nation needs to know:

I don't know much but I think we don't need such journalism that doesn't even tell us whether he had pop-corn or nachos. The nation needs to know. https://t.co/Djy4XXRme5

A very important thing to know:

.@TimesNow pls tell me if Rahul Gandhi brushed his teeth or no today

6 hours after Gujarat loss Rahul Gandhi went to toilet. Times now has exclusive footage of the toilet seat and water collected from commode has been sent to the lab for testing. #AreYouSeriousRahul https://t.co/B544PdxwVA

Is it sensible reporting?

So are other issues over? Is there perfect peace, harmony? Has everybody slept full stomach or at least something in stomach? Are our children getting proper education? Are our women safe?
Do you have a small bit of shame left?#AreYouSeriousTimesNow
#AreYouSeriousJournalists

A jibe at demonetisation:

Seriously Times now level day by day touching new low. Wake up and do something effective , before going to bed think “added any value to society or not or just doing journalism only for appeasing someone.” Wake up people knows ur truth

Go to a psychiatrist:

Did you mean serious guys don't watch movies ? If yes then seriously i will advise you @navikakumar to see a psychiatrist 😏😏

Entertainment unlimited
Keep pillows all around you may fall laughing.

Cancel the licence of this news channel:

What do you have to say about this? Let us know.