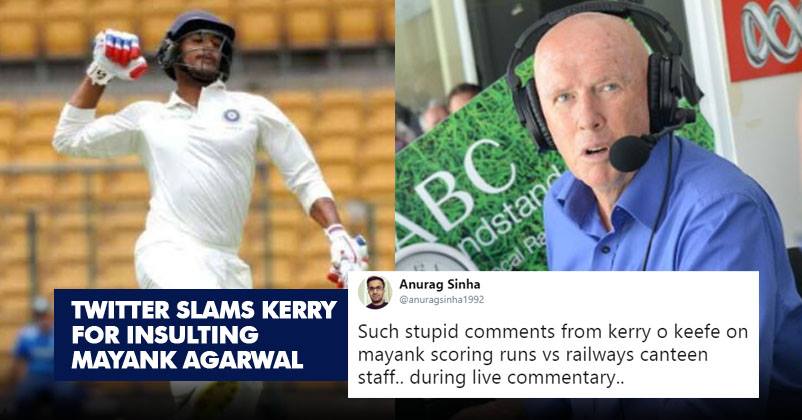 India vs Australia’s Boxing Day test match kickstarted today and it gave Team India a very good debut in form of Mayank Agarwal. The batsman impressed everyone with a triple century in Ranji Trophy and did it again as he played a cool 76 run innings against Australia. He was a treat for Indian fans while he hit some really good strokes.

However, Australian commentator Kerry O’ Keefe left everyone in a bad taste as he tried to insult the debutante.

While doing live commentary, he passed insulting remarks on Mayank as he said that his triple hundred in Ranji Trophy must have been scored against a team like Canteen XI, where the bowlers would have been chefs and waiters.

Twitterati which included both Indian and International fans disliked his comment and slammed him really hard on the microblogging site. Here are some of the reactions-

It might just be me, but it's pretty uncool to ridicule the FC comp of another country while using dubious stereotypes for a cheap laugh…

This is the reason why @imVkohli gets angry on these fellows.
#INDvAUS #BoxingDayTest

Exactly. These guys have worked their butts off to get to this level. Really poor form to make fun of that.

O’Keefe is a buffoon. That diatribe on the #RanjiTrophy competition was a. Classic casual racism, b. Disgracefully inaccurate. Strong competition providing an excellent breeding ground for test cricket. I thought we’d got rid of this rubbish with 9 losing the gig.

Absolute disgraceful . And mark waugh too he said an average of 50 in India is like that of 40 in India . Let me tell u if Australian player play a full Ranji season na they will not average more than 30

At last the lad showcased his talent in a great way Mr.O'keefe ! see wat a canteen staff and waiters of India can produce a talent,who scored 76 on debut ! Stat speaks O'shit sorry O'Keefe !

Now this was well deserved.

Here’s Why The 3rd Test Match Between India And Australia Is Being Called As Boxing Day Test Match
Tim Paine Teases Rohit Sharma, Says If Rohit Hits A Six He Will Become A Mumbai Indians Fan