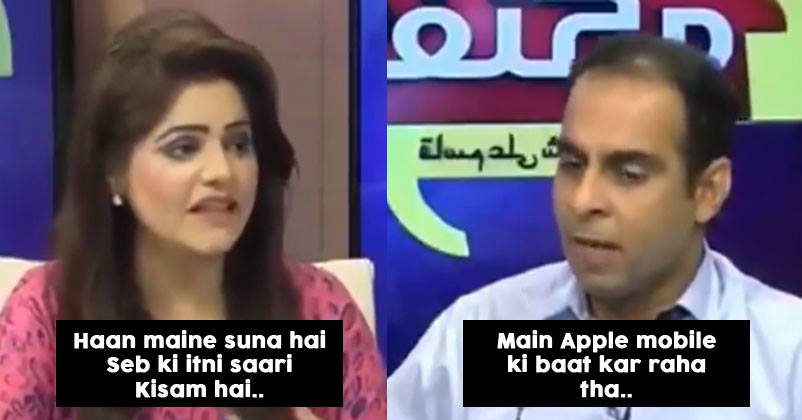 It is not the first time that such goof up can be seen online. A lot of people get confused and it is nothing new. But with social media on board, it becomes hard to escape from the eyes of the world. People can easily find the mistakes and it won’t take much time for them to get trolled. A similar incident came forward from Islamabad, Pakistan.

An anchor and the panelist was discussing the financial position of the tech company with the economic position of Pakistan and he compared the two and said, “Apple’s business is so much more than even Pakistan’s budget.” To which the anchor replied,” Yes, I have heard that Apple’s (fruit) business has been thriving lately and there are various varieties of it.”
The panelist than gently said The panelist responded to the anchor’s oblivious statement by saying, “I am talking about the Apple company, not the fruit.”

This video soon went viral and people could not stop trolling the anchor for her misunderstanding.

an apple a day keeps steve jobs away

That's called beauty without a brain

Can't blame the Pak citizens. Their government's have constantly fed them the hate-india education throughout their lives…

Are these mistakes really acceptable on national television?

A Hand On Rishabh Pant’s Shoulder Is Confusing People, Is It A Ghost? Is It Parthiv Patel? Who Knows
Honest Movie Review Of Malaal And Spiderman: Far from home