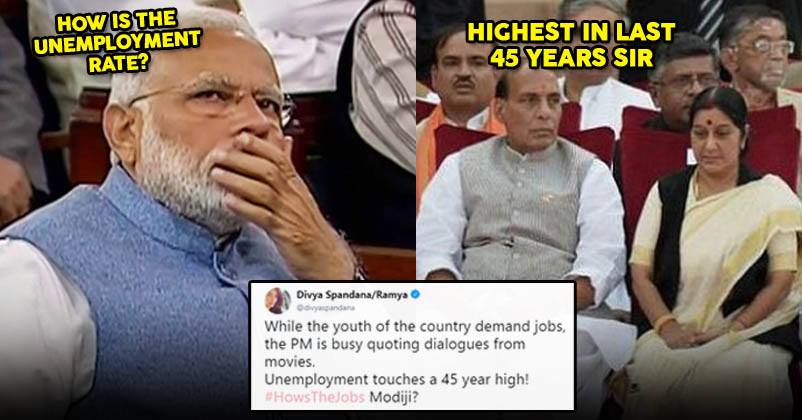 According to a report released by the National Sample Survey Office or NSSO, the rate of unemployment in India, during Modi’s tenure, is at an all time high. 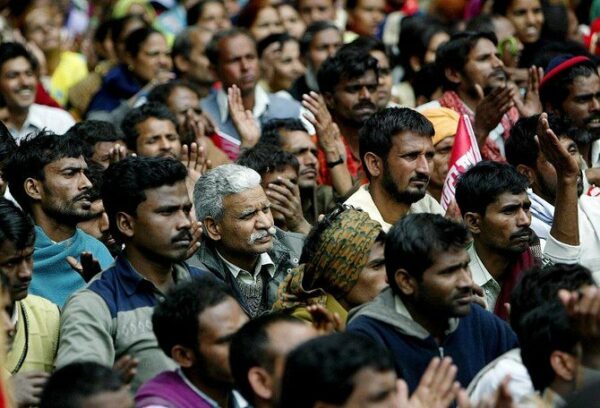 The Congress has now accused the BJP government for threatening the future of youth in India, since the unemployment rates are higher than they have been in the last 45 years.

According to Congress leaders, Modi’s promises of providing 2 crore jobs once he comes to power was no more than a facade, the consequences of which the Indian youth are facing.

In just 5 years, PM NoMo has devastated the economy & driven unemployment to a 45 year high.

The youth of India have one question for you Modiji, #HowsTheJobs ? pic.twitter.com/4azBFm6Wz0

Soon after, #HowsTheJobs began trending on Twitter, where thousands of Indians are questioning Modi on unemployment. Check out how netizens expressed their fury and frustration:

While the youth of the country demand jobs, the PM is busy quoting dialogues from movies.
Unemployment touches a 45 year high! #HowsTheJobs Modiji? pic.twitter.com/b79xY9jqIy

Hows the JUMLAS – At an All Time High!

The @BJP4India has ruined the economy. Give them five more years and we will be a nation of beggars, living on scraps thrown to us by the Chinese.#HowsTheJobs pic.twitter.com/idl4qRJlQW

#ModiToadies, your Fuhrer has made you jobless too, I know. So why in heavens are you wasting your time trending the #BJP crap ? Hosh me aaoo, mere bhai! #HowsTheJobs

They'll keep saying 'how's the josh ' to distract you. You keep asking them #HowsTheJobs

Modiji : 😷🤐
Youth : Why are you so silent?
Modiji are you playing PUBG 🙂

The current day situation of youngsters like us!! Someone please tell NoMo that speeches won't feed anyone.#HowsTheJobs pic.twitter.com/U63HzPud9b

#HowsTheJobs FAlLURES of BJP are never ending!!! This data was collected by the NSSO between July 2017 and June 2018 – and is the first official employment survey after demonetisation. NSSO Data Puts Unemployment at 45-Year High in 2017-18‼️ SHAME 😡 pic.twitter.com/puMeqIIkDJ

Modi steals jobs and then hides the date and then lies to us.
What a shame!! Time for NoMo2Go. pic.twitter.com/91p5SYNnpU

You will get an answer PATHETIC' from the youth of India.

You are shameless govt who have no concern for the youth

Democracy is in peril.

It's time to throw out this anti people Modi sarkar pic.twitter.com/9OhI9rOVrW

🤕 What the @BJP4India Delivered?

PA: But you always talk about achieving the highest?

Modi: You better check the unemployment rate, It's the highest in last 45 years😎#HowsTheJobs

PM Modi should have created 10 crore jobs in the last 5 years, but under him, India is reeling under unemployment.@narendramodi ser..
Youth of india asking #HowsTheJobs

35 lakh jobs lost due to DEMONetisation!

UPA govt. created a golden opportunity with its progressive policies, but DeMo delivered a death blow to India's people.

PM Modi can’t get away with ruining the future of Young India.#HowsTheJobs

These are just a few drops in the ocean. Maybe Modi will finally hear the voice of a thousand angry Indians roaring, while he comes up with rap songs and other gimmicks before the elections.

Video Of Bengali Bride Challenging Wedding Ritual Goes Viral. People Are Praising Her.
Amaal Mallik Slams Anu Malik, Says He Does Not Consider Him To Be Family.