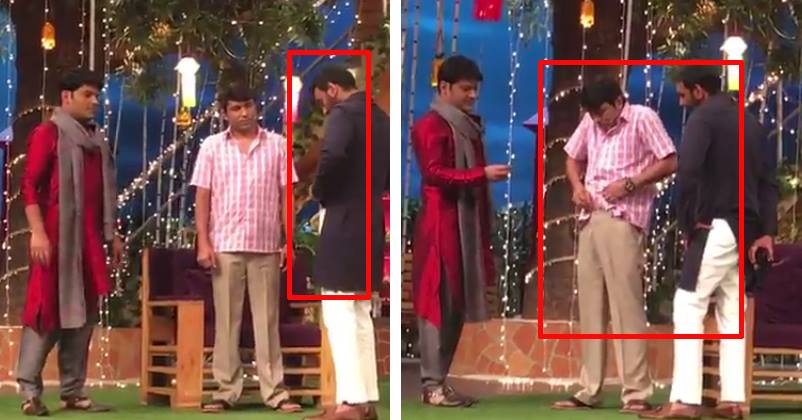 Ajay Devgn has always been famous for essaying serious characters. However, don’t be under the impression that he is a very serious guy; in fact, he is the biggest ‘Prankster’ in B-Town. Many actors including Arjan Bajwa, Asin, Bipasha Basu and Katrina Kaif have spoken about his mischief and pranks. Not only this, Ajay has even got a special name from Bips i.e. ‘Narad Muni’. Now, Ajay Devgn and Kajol graced the sets of ‘The Kapil Sharma Show’ to promote Shivaay and they definitely had good fun together. Even on the sets, Ajay couldn’t resist those pranks. Audience went crazy seeing this funny side of Ajay. This episode would be telecasted on the upcoming weekend and I know you are eagerly waiting for it. The actor played a prank on Chandu Chaiwala, and left the audience in splits. He took to Twitter and shared the video of this act with us. Do you want to watch it? Here it is…

For those who've been saying- "we hear you're a prankster, but never seen anything"- pulled one yesterday at The Kapil Sharma Show. pic.twitter.com/exz4Q3qNwy

Did you have fun? It is due to these funny moments that people enjoy watching Kapil’s show. ‘Shivaay’ is all set to hit the screens on 28th of October along with ‘Ae Dil Hai Mushkil’ and is sure to be a super-hit! So guys, would you like to try out this prank on your friends? Do share your thoughts in our comments section below!

Nargis Sets Greece On Fire With Her Hotness! You Just Can’t Stop Staring At Her Sizzling Bikini Pics!
These Facebook Statuses By Priyanka Jagga After Eviction Will SHOCK YOU!!! A Must Read!