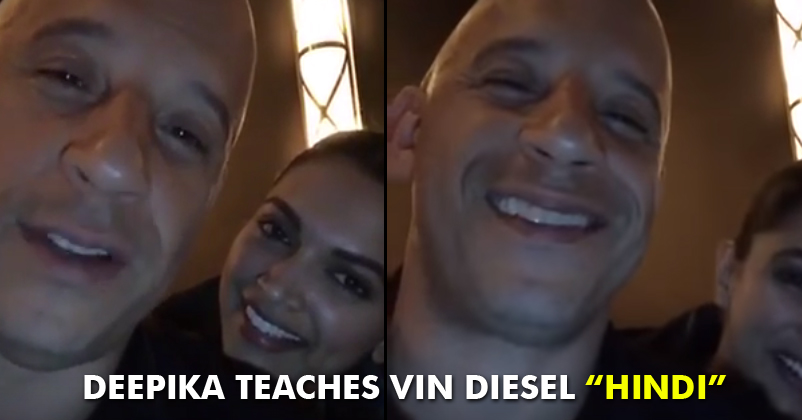 When the BEAUTY meets the BEAST, awesomeness is bound to happen. And this is what many fans on Vin Diesel’s Facebook Page experienced when he was live on Facebook with India’s most talented actress Deepika Padukone. The live streaming was broadcasted just after they had dinner. However, apart from these adorable moments, there was this cute little moment when Deepika Padukone made Vin Diesel speak in Hindi for the Indians watching the live stream from different parts of the world. And this is what he spoke – ‘ Namasthhhe ! ! Mai Auupp Sabhi Kouu Bauhauuut Pyaaaarrr Kurthhhhha Houuuun ! ! ‘ Watch this cute video

However, it was indeed not that easy for him to roll down his tongue and speak Hindi in Indian accent which made him look a lot more cuter. He did fumbled at the first attempt, but Deepika made sure to make him speak in the most best possible way. She did explain him later about what his words meant.

At the end, while signing off, people did really like his Hindi which they expressed in the comments. And if you guys still want to see him speak in Hindi, you have got another chance as he will be doing a Hindi press conference soon ! ! So stay tuned with RVCJ to get more updates on him ! !

This Funny Conversation Between Dhoni & Sushant Will Make You More Excited For The Biopic !
KJOs Back With His Cup Of Koffee Having This Celebrity As His First Guest And Not SRK!