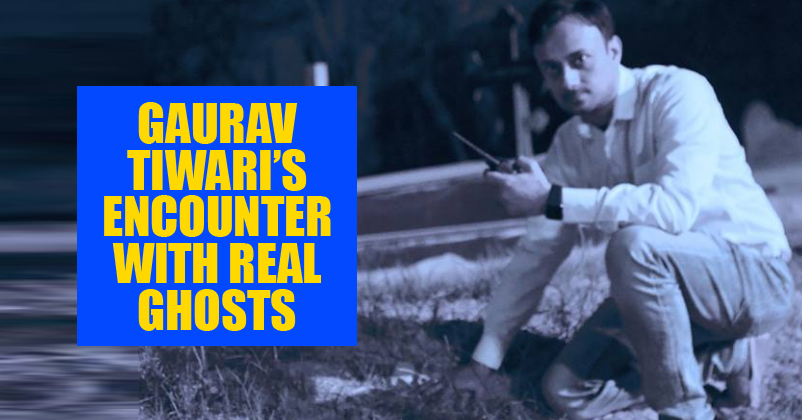 Internet can’t get over from the recent mysterious suicide of India’s leading and most famous Paranormal Expert Gaurav Tiwari. Few people ( Comparatively quite a lot) had known him since the time he started his career as a ‘Ghost Hunter’. On 7th July 2016, he was found dead under mysterious circumstances with a thin black line across his neck, in his bathroom when his family was in the house. Medical report states that he died due to ‘Asphyxia’, a condition where the body doesn’t get enough supply of oxygen causing unconsciousness and suffocation leading to death.

Based on Preliminary Autopsy Report, police said that his death did not involve any foul play and he did commit suicide by hanging himself using a piece of cloth.

Early Professional Life – Gaurav’s friends opened up in an interview and added that his professional career as a commercial pilot went on a downfall after he shifted into a house that was tagged as `haunted’. This got him to study about paranormal activities. He left his job and got himself enrolled in a private Institute where he studied Metaphysics. By the end of his education, he had conducted 80 on field investigations and became a certified paranormal investigator.

No matter what were the reasons for his death, one thing is for sure. Gaurav Tiwari was a one hell of a guy. If society allows me to be honest, I just want to confess that I didn’t know him before I started writing articles for him since yesterday night. But when I did some research on his work, I was astonished to see the kind of vast experience that he had and the value that he added in the field of Paranormal Research Work. The most fascinating thing about him was the kind of approach that he had against such situations where he was supposed to face “Supernatural Power”.

And his claims did prove some facts about the existence of something “UnExplainable Forces” although this does contradicts to his previous claims that everything in the world is “Explainable” on the basis of Science, Logics and Facts. Well now we leave it upto you to explain us the series of following video which he shot using his own High Tech Gizmos.

Have a look at below video compilation. He shared 1st video clip with caption “Be Fearless! “Knowledge Cancels Fear”… My Morgue Chiller challenge in Haunting: Australia!”

In 2nd clip (last 10 seconds), you can even see Gaurav Tiwari capturing the small Ghost baby, in case you missed to notice it then here’s screenshot from the video clip, you can see the baby feet of Ghost:- In below clip, he can be seen talking to a spirit ! ! I am not telling you, whether ghost exist or not, but you definitely need balls of steel to do such things.

Well, being a pseudo Athiest myself, I would like to add that even I don’t believe in ghost or spirits, but when I see videos like these, I guess its our human nature to “Just Shut The Freaking Laptop”.

It’s up to you to decide whether such kind of energies really exist or not. Our work is to provide you claims from different people, but the call is always yours ! !

BEWARE! Dooms Day Is Near! 9.0 Earthquake Lurking Under India & Bangladesh, Says Research
Father Killed His Innocent 6 Year Old Girl For Such A Petty Reason! You’ll Hate Him After Reading!