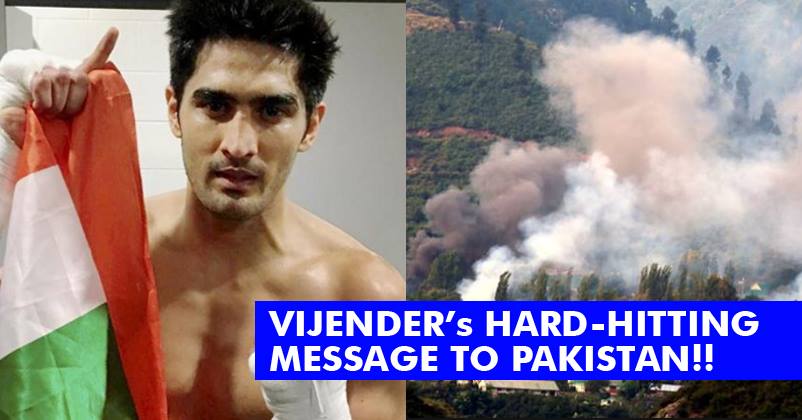 Sunday mornings are supposed to be great, but today was an exception for many Indians as the news of terrorist attack broke into our happy crystal life once again. They suggest that Kashmir issue can only be dealt with ‘DIALOGUE’, but it is also written in golden pages of history books that ‘ACTION SPEAKS LOUDER THAN WORDS’. And finally it’s time to act or more precisely REACT.

Since the last 70 years we have been condemning every attack and reacting to it by bringing out candle march pasts. But the flames of the candles are just fading away with the lives of our soldiers. This very flame is turning out to be the fire for the cremation of our soldiers body, but not the fire breaking into the enemy’s bunker. Vijender Singh and Virender Sehwag, the two proud Jatts just took this incident on Twitter to show their disappointments and came hard on the enemy. Vijender Singh landed right punches by criticizing Pakistan for this attack.

Very sad news 17 soldiers martyred my condolence to the family 🙏🏽 #UriAttack if Pakistanis have chosen war.Let go for it🇮🇳 #IndianArmy

Apart from Vijender Singh, Virender Sehwag also joined in and criticized a media house for calling these TERRORISTS as REBELS which is for sure the most disgusting thing at the time of such a chaos. He gave a firm stand by suggesting that terrorism should be answered appropriately.

Very very heartbroken to hear about #UriAttack
They are not Rebels,they are Terrorists.
Terrorism must be answered appropriately

“Some of the terrorists had some items with Pakistani markings, I have spoken spoke to Pakistan DGMO and conveyed our serious concerns on the same,” Director General of Military Operations (DGMO) Lt Gen Ranbir Singh said in a statement to the media on Sunday.

Early morning around 5 Am, Militants attacked an Indian Army brigade headquarters in Jammu and Kashmir’s Uri on Sunday. Initial reports suggest that the 4 terrorists who carried out the attacks on the Indian Army in Kashmir belong to “Jaish-e-Mohammad Tanzeem (JEM)”. The Indian Army has lost 17 soldiers in this attack and over 30 soldiers have been injured so far.

We strongly condemn the cowardly terror attack in Uri. I assure the nation that those behind this despicable attack will not go unpunished.

We hope that a strong action is taken against the culprits of this attack. Please share your opinions about the subject in the comment section below ! !

Once Again Kejriwal Plays Blame Game With Modi! This Time Allegations Are Serious….
This Rapist Managed To Afford A Defence Lawyer Who Charges 5 Lakhs For Every Case – WTF