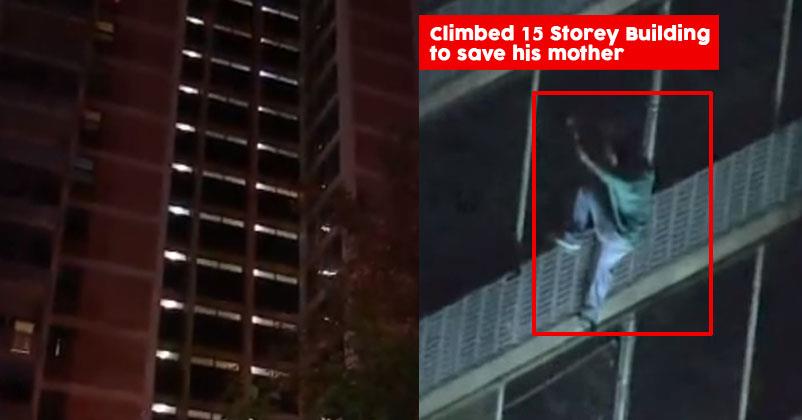 It’s often said God couldn’t be everywhere, therefore he sent mothers. Whenever the children face any kind of problems our mothers will cross any limits to protect us from all kind evil powers which is harmful to their children.

The bond shared between a mother and her child can never be measured or expressed to anyone. We as children fail to express our love for our parents no matter how much we fight, quarrel at the end of the day we love our parents. The love for our parents is a treasure which unfolds only on special occasions.

Recently a 35-year-old man from West Philadelphia proved no love is bigger than a mothers love. The man named Jermaine was caught on camera scaling down from the flame engulfed building just like spiderman. Rescue helicopters can be seen flashing lights on the man to help him climb down safely. The video instantly created a buzz as the netizens spotted the spiderman.

HIGH-RISE FIRE: A man is seen scaling down a 19-story apartment building after a fire in West Philadelphia.https://t.co/Rmujuv7vsb pic.twitter.com/2NsXXYgJVL

Jermaine said in an interview with NY post, he wasn’t worried about his safety but he was concerned about his mothers safety. I took it upon myself so there’s no limits that’s my mother. She can’t get out of the bed as she’s bedridden so if there’s a fire she needs help.

The reporter of 6ABC took to her Twitter handle to share details of the incident, Officials say the fire started in the trash room on the first floor. Flames shot up the trash shute to the top floors, heavy smoke then poured into hallways. 4 residents suffered smoke inhalation, 3 first responders had to be treated for that as well as heat exhaustion.

Officials say fire started in the trash room on the first floor. Flames shot up the trash shute to the top floors, heavy smoke then poured into hallways. 4 residents suffered smoke inhalation, 3 first responders had to be treated for that as well as heat exhaustion. @6abc pic.twitter.com/3NwjLVnYay

Netizens are amazed by the dedication of this man for his mother. The breathtaking video spread like wildfire and twitter has found their next spiderman:

Very happy to see that he escaped from there. But unhappy because no one came to help him out but the people around there were busy in making videos. #sadreality 😞😞

Do they have working sprinklers? Why not!?!

Damnnnn!!!!! Wow, he made that look easy. So happy he is okay and can literally walk it off !!!

He said NOT TODAY SATAN pic.twitter.com/XqxbamWf2R

Funny how quick you can become Spider-Man when your life is on the line pic.twitter.com/AonPxbvwHY

He looked back at the building like " last time i go in there pshh " pic.twitter.com/MUYflbo1rr

Damn even he gave you props for that one!😜🙏🏾🙌🏾 pic.twitter.com/zS2QqjdurT

No other relationship is bigger than the mother’s love, my love.