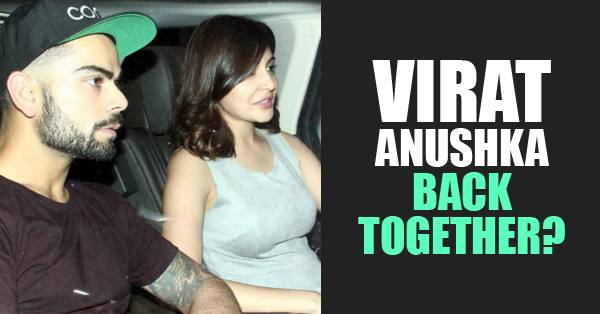 The fans of cricketer Virat Kohli and actress Anushka Sharma were unhappy and upset for quite some time now after the alleged break-up of the love birds; however, here we have good news for their fans as the couple has been spotted together last evening in Bandra, Mumbai coming out of Royalty after having dinner together. A lot of speculation was done about the reason behind the break-up of the couple but neither Virat nor Anushka made any statement about whatever happened in their lives.

A photo of both of them was tweeted by their fans which makes it quite clear that the couple is together again! Here a clearer one! The same pic in a better resolution! However, Virat did respond when Anushka was trolled and targeted for his bad performance on the cricket field; he said that all those people who are taking jibe at Anushka should be ashamed of themselves.

He added, “Shame on blaming and making fun of her when she has no control over what i do with my sport. If anything she has only motivated and given me more positivity. This was long time coming. Shame on these people that hide and take a dig.”

He further added, “And i dont need any respect for this post. Have some compassion and respect her. Think of how your sister or girlfriend or wife would feel if someone trolled them and very conveniently rubbished them in public.”

Anushka has been trolled every time Virat has not performed on the field as it happened after India’s loss against Australia in Semi-final of World Cup, last year.

This Man Files An RTI To Know About AAP’s Extravagant Ads. Response He Got Is Shocking To The Core
Indian Cricket Lovers Will Love This New Twist Which Is Gonna Take Place In IPL 2016