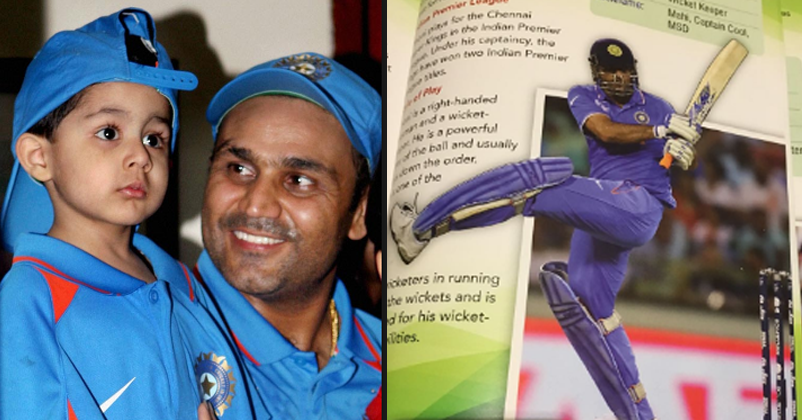 There was a time when the whole media world buzzed about the rift between Virender Sehwag and M.S Dhoni. Articles were written, prime time news hour debates were discussed and what not. Such negative environment did affect both the players in some way or the other. However, time and again these two players have come forward to clear the air of doubt and showed their sportsmanship by praising each other’s contribution to the Indian Cricket Team.

Recently Virender Sehwag shared something on twitter which brought smiles on the face of millions of people. He shared a sketch of M.S Dhoni. Now before someone thinks it the other way around and makes a negative clickbait news about it, the sketch was made by Sehwag’s son Aaryavir. For a 10 years old kid, it’s the effort that we seek in his art and not the perfection. Have a look at the sketch. Well, many of you may not resemble it with M.S Dhoni’s picture, but let me now show you the reference through which he drew the picture. I bet you will be mesmerized by his efforts. Here we go. Isn’t that something spectacular form of work from a 10 years old kid? Well, you call me a pathetic judge, but I guess this little guy has indeed some good talent which made Virender Sehwag tweet this picture.

Pic 1 is a sketch of @msdhoni made by my elder son Aaryavir .Even in this sketch,Maahi maar raha hai. #JaiNataraj pic.twitter.com/VlT7DvpTCC

As soon as people saw this pic, some made their own sketch while some appreciated his son’s effort. Have a look at what people said about it on twitter.

Another great projection of talent ! !

Even Junior Sehwag is Dhoni’s Fan

WOWWW even junior Sehwag is a Dhoni fan ❤️❤️❤️

What about natraj shot? Wait, is there a shot like that?

The Natraja Shot, may be the way to describe it

Aren’t the reactions amazing? What do you think about the sketch. Please share your opinion in the comment section below.

8 Ugliest Fights In Cricket Which Turned The Ground Into A War Battlefield!
Virat Kohli & 7 Other Sportspersons Named For Padma Shree! Truly Deserving!