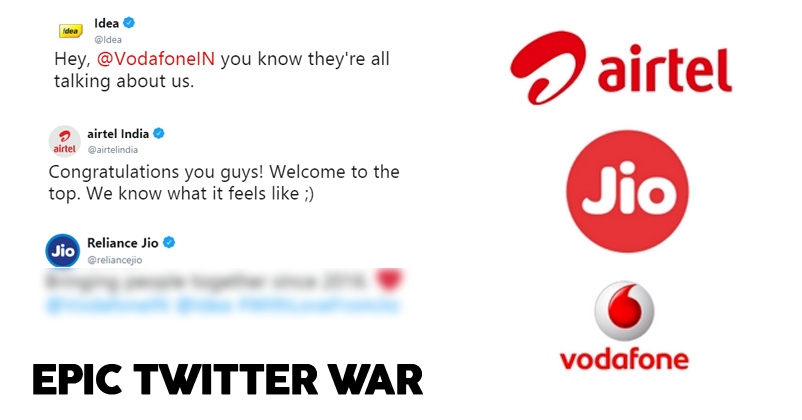 Finally Vodafone India and Idea Cellular have merged together and this is the biggest association in the telecom industry.

Now, this merger is known as “Vodafone Idea Ltd” and it has 6 independent directors and 12 directors; the CEO is Balesh Sharma and he aims to take this association to a new level.

Vodafone Idea has already dethroned Airtel; the distribution is going to happen in around 17 lakh retail outlets. Idea took to Twitter to tell Vodafone that everyone’s talking about them;

Hey, @VodafoneIN you know they're all talking about us.

The tweet read, “Yeah @Idea. It’s time we made it official.😉🙂 https://www.vodafoneidea.com/”

It received congratulatory wishes from one and all. However, Jio had a totally different take on this collab. It came up with a mind-blowing reply & we can’t stop but appreciate the telecom operator.

The tweet read, “Bringing people together since 2016. ❤️@VodafoneIN @Idea #WithLoveFromJio”

Jio is known to bring people together through calls and videos since 2016 i.e. since the time of launch. However, it took a subtle dig at Vodafone and Idea. Jio said that it is responsible for bringing people together, indirectly referring to this merger. If you didn’t understand this meaning, let us tell you that Jio indrectly said that it is due to it that Vodafone and Idea have merged (As business is hampered). Creativity level is top class and we wonder if the one handling the Twitter has got a raise or not.

Jio very well knows how to keep the audience entertained. We loved the tweet; even Airtel tweeted but its reply is not as effective as Jio.

Congratulations you guys! Welcome to the top. We know what it feels like 😉 https://t.co/y0EZm0y0ON

Jio has won this epic conversation, don’t you agree?

Continue Reading
You may also like...
Related Topics:Idea, jio, Vodafone

Brands Trolled Netflix In Their Own Way. Came Up With Hilarious Radhika Apte Meme Versions
Big B’s Daughter Shweta Launched Her Own Fashion Line, Got Badly Trolled For Copying Design