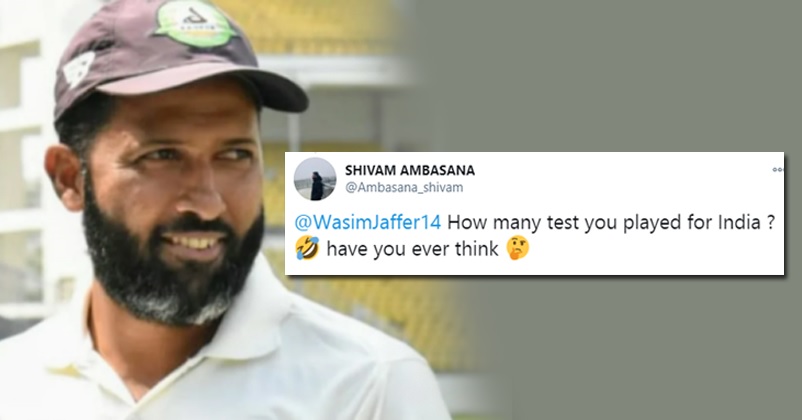 Wasim Jaffer, the former Indian cricketer, has been quite active on social media for past some time and he never missed the chance to have fun by taking a dig at the Aussies in the recently concluded India-Australia series. The Indian team ended the tour by winning the four match test series by 2-1 and the whole country celebrated their victory. The 42 years old former cricketer was also very happy and didn’t want to miss the opportunity of pulling the leg of the Aussies.

He took to the micro-blogging site Twitter and wrote, “So what’s gonna be the excuse this time? Ponting, McGrath, and Warne weren’t playing? 😜 #AUSvsIND”

So what's gonna be the excuse this time? Ponting, McGrath, and Warne weren't playing? 😜 #AUSvsIND

If you remember, last time in 2018-19 when India won the Border-Gavaskar Trophy, many former Aussie cricketers and fans made an excuse that two Australian batsmen David Warner and Steve Smith were not a part of the team. At that time, these two Aussie cricketers were banned from cricket after they were found to be involved in the sandpapergate scandal.

With this tweet, Wasim Jaffer took a jibe at the Aussies but a netizen tried to make fun of Wasim by asking him, “@WasimJaffer14 How many test you played for India ?🤣 have you ever think”

@WasimJaffer14 How many test you played for India ?🤣 have you ever think 🤔

Any other person would have got angry or lost cool at such a question but it’s creditable on the part of Wasim Jaffer to remain calm and give a beautiful reply as he tweeted, “I might have played just 31 tests my friend, but when I see the Indian team play I feel like I’m playing with them. And I’m sure a billion+ people feel the same.”

I might have played just 31 tests my friend, but when I see the Indian team play I feel like I'm playing with them. And I'm sure a billion+ people feel the same. 🇮🇳 https://t.co/cGvIAQWzVB

Wasim Jaffer made his international debut in the year 2000 against South Africa and in the 31 test matches that he played, he has scored 5 centuries, 11 half-centuries and 2 double tons. He is the highest scorer in the Ranji Trophy and has also worked as the batting coach of Bangladeshi cricket team as well as Kings XI Punjab.

Wasim Jaffer’s reply was pure gold and heart-winning! You nailed it sir!