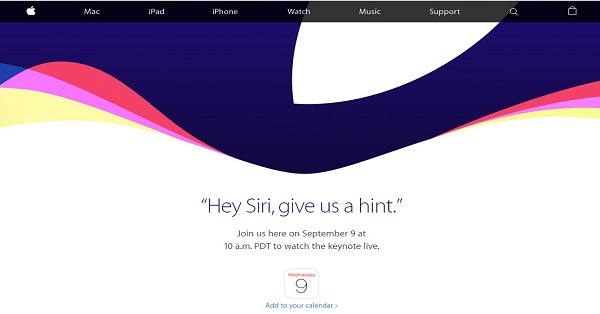 Just few hours from now in California, Tim Cook is going to be on stage for the launch of Apple’s new flagship phones and many more product launches. Given that, everyone would like to watch the event live on their available devices. Since Apple has decided to stream the event live for the people around the globe via its website, still there are many complications fro Android and PC users. To be mentioned the event will start on September 9, 10 AM PST (10.30 PM IST).

Hence, here is how you can watch the Event Live on You Favourite Devices.

To watch the event live on your Apple TV set-top-box you will need the second-gen or third-gen set-top-box running firmware 6.2 or later. After making sure you are on the latest firmware. You could see a new App icon for streaming the event live. Select that app using the Apple TV remote, Press Play and you are good to go. The easiest way to watch the Apple Event live is to watch it on any of the iOS devices. With pretty much no configuration or trick you just need to launch Safari browser and visit apple.com/live on it. Just one thing to remember, your iOS device should be running iOS 7.0 or later. You’d need VLC player to stream the event live on any Windows PC prior to Windows 10. Just launch the VLC Player. Open MEDIA menu then click on OPEN NETWORK STREAM and enter the following URL in the NETWORK tab. 6. On any Android Device

Yes unofficially you can also watch the event on any Android device with VLC Player installed. Just launch the VLC for Android App on your device and tap on the 3 bars placed at the top left of the App, then Tap on on Stream and paste the following link to watch the event. With plethora of options available to watch the event live on almost every device. You would not want to miss the most hyped event of the year today at 10.30 PM IST and don’t forget to let us know in the comments below on which device are you planning to watch the event on.