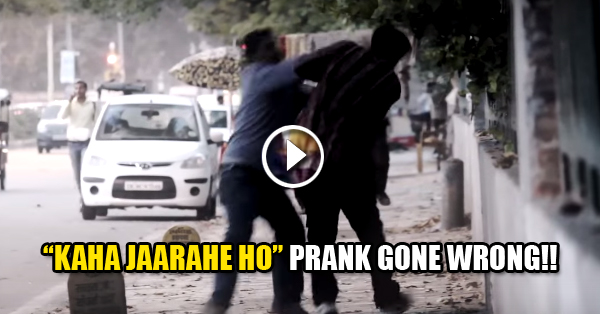 Remember an awesome and very hilarious prank by a Pakistani actor for a local Pakistani TV Channel. The video featured the actor as a Man with weird dressing approaches random people walking on road and SHOUTS in their ears “KAHA JAA RAHE HO”. He shouts so loud that people actually get scared and fall back. Soon after they realize that it was nothing but a Man shouting in their ears they get angry and some of them even Beat the Guy for shouting so loud and ask him for the reason he is Shouting. It was hell of a Funny prank and one of its kind.
On the same concept, taking inspiration from that Pakistani act, TROUBLE SEEKER TEAM planned to do the same act at a very known place of the Capital city. The two actors Rahul & Prince approach various people and Shout the same phrase “KAHA JAARAHE HO” to see the awesome reactions of people. Some got scared, some didn’t react while there were couple of them who got angry and didn’t hesitate to even slap the actors 😀
On the whole, a well performed prank with awesome public reactions. Watch this hilarious prank which will give you a good laugh.

This Is The Most Ugliest Cricket Fight Ever!!
A 6 Year Old Girl Gives A Life Lesson, Wants Divorced Parents To be Friends Again