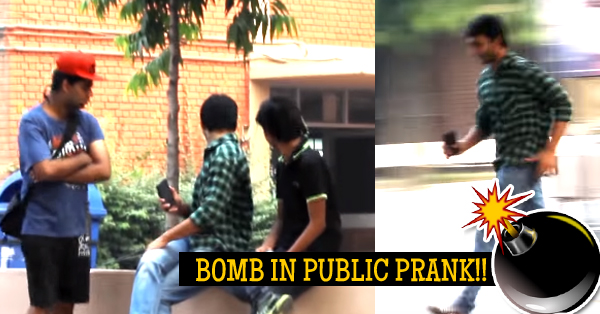 India’s Best Prankster Team is back with a super hilarious prank video which will blow up your mind. This is the first of its kind. India is a country which always has a threat of terror activities fuming up from the neighboring countries. In the recent times India had faced quite a few bomb attacks which had created a sense of Fear among people in here. They are always afraid of the fact that terrorist activities may take place anytime and anywhere in the country. And Trouble Seeker Team had used the same fear to make this hilarious prank video where the one person from the team goes near random people and drops a bag and other comes asking if the bag belonged to them. The twist in the tale is that they place a Bluetooth speaker in the bag and as soon as people listen to the beep beep sound from the bag they start running. The reactions of people are way too hilarious. You cannot miss to watch this epic prank.

Continue Reading
You may also like...
Related Topics:Bomb, Epic Bomb In Public Prank Which Scared The Sh*t Out Of People!!, Prank, Trouble Seeker Team

Alia Bhatt Did It Again, She Thinks Onions Are 7 Rupees Per Kilo
On Air With AIB : First Episode Is Here And Phenomenally Explains Why Be Good?