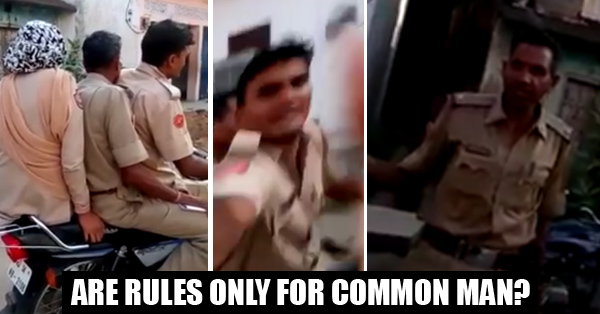 Last week I received an E-Challan for not wearing a Helmet. Which I had to pay off quickly as if I wouldn’t pay that the traffic police would even seize my vehicle. Here comes the Big Question. WHY ONLY US? WHY NOT THEM? How many times have you been caught riding a Bike without Helmet? How many times you have been caught and fined for triple riding? What is that the rule says? Are the traffic rules only for common man and not for the rule makers and those authorities who have been assigned the duty to see that no rules are broken? Many a times we come across many instances where we see the authority of the rule makers themselves break the rules and expect people to follow the rules. But how many times did we raise our voice against them? How many times did we stop a Policeman himself who is breaking any Rule. We always in our day to day find some Policeman or Traffic Police Guy breaking the traffic rules, but we never interfere. Here is a video of a man who has raised his voice against them. This man from Jaipur found a Police Personnel triple riding on his bike and that too without helmet in the busy streets of Jaipur City. The very next thing he did is took out his mobile phone an tried to record the instance & number plate of the policemen. While he was doing so the policemen who was riding the bike even tried to attack him & the other policemen tried to approach him. They were angry with the fact that he was recording their video.
He soon uploaded the video on Facebook and got over 50000 views and over 2500 shares on it.
Check out the video here:-

You can watch it directly on Facebook by clicking here

Share the Post & Let this matter reach on the Tables of those Law Making Bodies. Because LAW IS ONE FOR ALL be it Common Man or the police. Comment your views and send us any video you have on the same issue.

Marathi Movie “COURT” Makes It To Next Year Oscars!!
This Launch Party Video Of “Andaz Apna Apna” Every Fan Of This Movie Should Watch