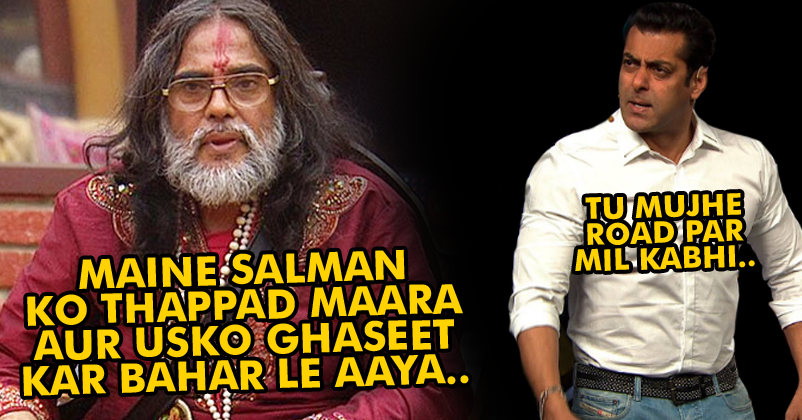 Om Swami can be rightly termed as the controversy child, isn’t it? After creating too much of chaos in the Bigg Boss house, Om Swami has finally been kicked out. However, after his exit, he has been hitting the headlines for all kinds of baseless statements. Yes, his frustration levels have increased to a great extent and he is constantly accusing contestants for some or the other reason. He has blamed them for kidnapping him and has also made shocking revelations about Salman Khan.

First he accused that Salman is an ISI agent and at the same time he alleged that his food was adulterated with drugs.

Amidst all this, we have come across Swamiji’s interview and it is extremely shocking. In this, he is talking about an incident in which he slapped Salman and says that it was due to this that he was kicked out.

Not only this, there are also reports that he is threatening about creating hurdles in the finale if the makers don’t give him a wild card entry. Om Swami says he will hit Salman Khan;

So guys, do you believe Swamiji or is it just another controversy? Do share your views in our comments section below…

16th Day Collections Of Dangal Are Out! It Will Break The Biggest Record Soon!
Emirates Mistook Sushant To Be Dhoni! Sehwag Trolled Them In The Most Epic Way…