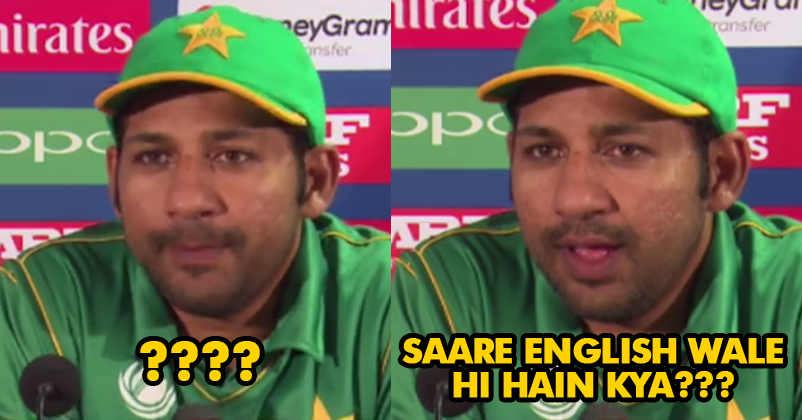 The ICC Champions Trophy is becoming interesting day by day; as the semi-finals are approaching, fans are busy cheering for their respective teams. Earlier, Pakistan was a very strong team, but now, their performance isn’t up to the mark. India easily defeated Pakistan in the match on 4th of June; we saw how the social media was full of jokes and memes.

Pakistan team is trying hard to please fans; let’s see luck is in their favor. Yesterday, the team lived up to their fans’ expectations by beating Sri Lanka. However, the post-match presentation caused a lot of embarrassment.

When it comes to post-match presentations, Pakistani players always lack that confidence to speak. People keep making fun of their English speaking skills; now, Captain Sarfraz Ahmad has given us one more chance to make fun of their language inefficiency. Yesterday, after Pakistan’s win, Sarfraz Ahmad arrived for a post match presentation, but the moment he realized that there were only English reporters, he was surprised.

Might be Sarfraz was thinking about the problems he’s going to face while interacting with them, LOL. He gave an instant reaction and forgot that the cameras were on him; someone captured this priceless reaction and circulated the video on the internet.

Don’t miss out how he reacted; watch video…

He just asked one question i.e. “Saarey English mein hain?”; that look on his face gave us a good laugh. What’s your reaction after watching the video?

When Mouni Roy Almost Kissed Salman Khan In A Show… Fans Can’t Miss This Viral Video
Ever Wondered Why We Call This Fielder As Third Man? Here’s The Answer