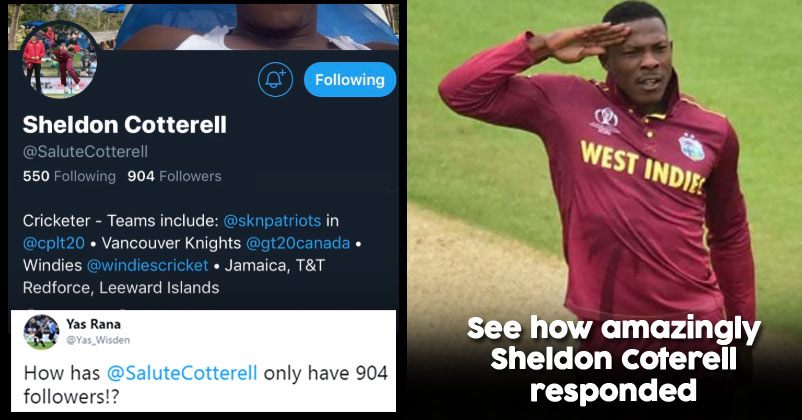 The West Indies international cricketer Sheldon Shane Cottrell recently gave a befitting reply when he was asked why he has so less number of followers. Sheldon is a left-arm fast-medium bowler and a right-hand batsman. Cottrell made his Test Debut in November 2013 against India at Eden Gardens, Kolkata.

Sheldon only has some 900 followers on Twitter and someone got curious, even after being an international star why he has this less number of followers. The tweet read,” How has @SaluteCotterell only have 904 followers!?”

And Sheldon has just the perfect reply for him. He replied,” Bc my skills are better on the field than in 280 characters.” ( BURN!)

Bc my skills are better on the field than in 280 characters 👋🏿 https://t.co/0cBoTbOX1V

People could not stop laughing at his epic reply, he not only told the person what is important but even made it clear that fame is not important for him. People totally supported the cricketer with his answer.

Make that 905 followers dude. Keep it up!

You are a champ sir. No doubt about it. You have many fans here in Pakistan.

More respect to you

Well, you got it, Sir! Definitely, you are a champion in the field and in words too.

BCCI Gets Slammed For Calling India’s Victory A “Thumping Win”
Don 3 Might Never Happen, SRK Fans I Can Hear Your Hearts Breaking