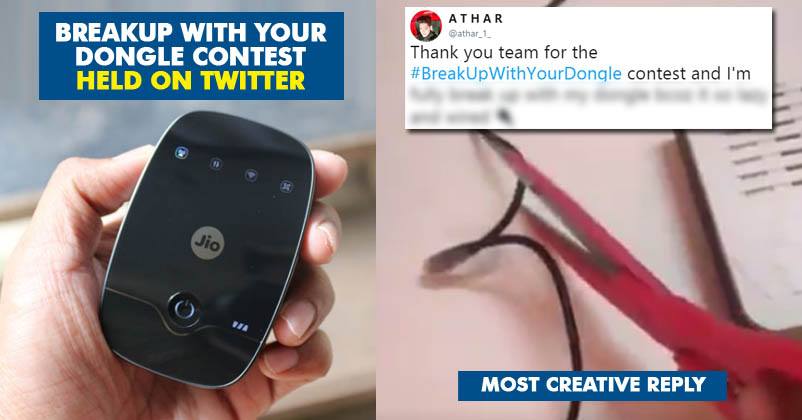 Time and again, Jio has showered us with some amazing deals and offers, which are simply irresistible. After bringing a storm, rather a Tsunami in the market of smartphones, Jio is on its way to capture the broadband sector too. The company doesn’t make fake claims but actually thinks from the customers’ point of view and gives them all the benefits that it can.

The latest offering by Jio is its JioFi which the company is offering at a 50 percent discount. Well, this is a limited period offering but is something which has brought a smiles on our faces.

Many people have taken advantage of this festive offer; the original price of this Wi-Fi dongle was 1999 but now, Jio is offering it at just Rs 999. Can we get a better deal than this? It’s a BIG NO!

If you too wish to get Jio’s 4G VoLTE portable hotspot dongle, you can avail the scheme till 30th of September. To promote the scheme further, Jio’s fan club launched a contest “#BreakupWithYourDongle”.

It was basically a contest which asked people to share their bitter experiences with other dongles and break up with them. The winner of the contest was promised a free JioFi device.

Here’s the contest question from the Fan handle;

“Hey Jio Fans, get ready for #BreakUpWithYourDongle Contest to win a #JioFi Device”

The contest looks interesting but the replies were all the more entertaining. The winner’s reply is doing rounds on social media. Yes, he actually came up with the best break up story with his dongle. We must salute his creativity. Wanting to know the answer? Here you go…

Thank you team for the #BreakUpWithYourDongle contest and I'm fully break up with my dongle bcoz it so lazy and wired🔌 pic.twitter.com/PI9AkhT1zN

He tweeted, “Thank you team for the #BreakUpWithYourDongle contest and I’m fully break up with my dongle bcoz it so lazy and wired🔌”

Haha, that was hilarious. Although no one could match his creativity levels in this contest, they definitely didn’t hesitate to share their experiences. Check out some tweets..

During the floods, JioFi was my only support system! Saviour!

I don’t need to be worried about the High Bill Rates of my internet provider. Shifted to JioFi Device

Had the best experience!

Hosted an online gaming contest in my college. Had the best experience with JioFi

He gave it to his watchman!

No doubt, Jio is giving the toughest competition to other providers by winning hearts of customers. Well, literally, there was just 1 winner who got a JioFi device but if we think a bit more practically, we all are the winners. Only a winner gets Wi-Fi dongles at 50 percent lesser rates, isn’t it?

Thank you for everything Jio. We love you.

Continue Reading
You may also like...
Related Topics:jio, JioFi

When Mukesh Ambani Defeated Bill Gates & Became The World’s Richest Man
Has Modi Been Better PM Than Manmohan Singh? Here Are 8 Comparisons That Will Give You The Answer