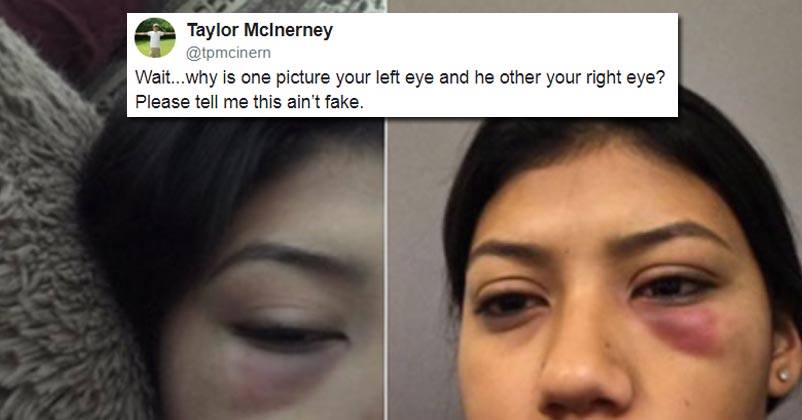 Women are trying their level best to make their identity in every field instead of just remaining within the four boundaries of the house where they are limited to household chores and are not able to explore their full potential.

Some men are welcoming their transition; however, there are still many who are unable to digest the fact that women are matching their pace. Such men feel as if their ego has been hurt whenever they find a woman living her life on her terms. These men find it really difficult to handle rejection or in simple words, they just cannot hear a NO from a woman.

It has to be a personal decision for a woman whether she wants to share her personal details to a stranger or not and when Carla did the same, she had to pay for it with physical injury and pain.

Carla went through this horrible experience just because she denied revealing her name and contact number to a man she didn’t know and this hurt the ego of that pervert to such an extent that he hit her. Nevertheless, she was not the one who would just remain silent and bear the trauma. Instead, she decided to make everyone know about it. 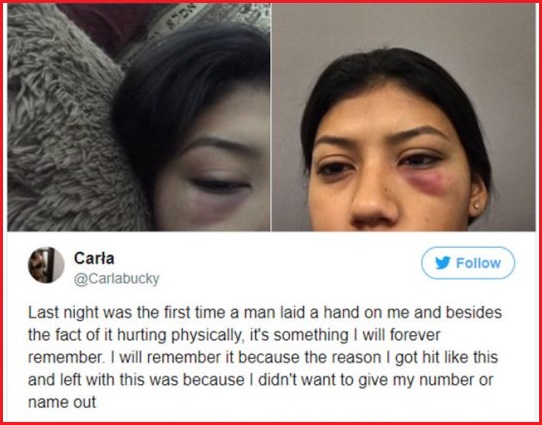 “How full of yourself do you have to be to get so pissed when you’re told “no”? How badly raised can you be to lay your hand on a girl? How can you just run off after you drop her to the ground? How much of a coward can one be?

How does one explain to their parents that their little girl got hit by a man because her attitude and response triggered him? Be safe when you’re out walking alone ladies, be smarter because apparently some of these men aren’t.”

There are very few people who can actually understand what the woman went through; however, one is not expected to mock her by calling the injury fake.

Sadly, few Twitter users called her a liar and entitled this incident as fake. Here are some tweets:

Wait…why is one picture your left eye and he other your right eye? Please tell me this ain’t fake.

I’m not either…however this is a common thing and is terrible. Hope this isn’t an attention grab.

You guys hear about that girl who faked her own kidnapping? Hope this is really authentic because that other girl fooled the whole world

Women will lie about anything in the world out of spite, or for attention.

On the other hand, many users shut the trollers down and extended support for the poor woman.

The mole is on the same side of her face, it's extremely stupid to say she faked a swollen black eye through 2 different stages of swelling

If she has a iPhone, my guess is one of the pics was taken on a snapchat camera and one on phone camera, the camera one turns photo around

One pic is taken in a mirror. DUH. C'mon man, stop trying to rationalize this away. Men do this shit ALL.THE. TIME. We all have stories.

When people stop silencing women who speak up by calling them liars, we can all calm down. Quite sad that you dont give a damn.

You are the problem. Doubting victims should not be the norm. False positives are the exception. Learn about this. Do better.

What do you have to say about this? Let us know.

5 People On A Bike, 2 Kids On Fuel Tank & No Helmet. Police Felt Helpless But Twitter Laughed
Jio Is Offering 100 Percent Cashback On Recharge Of Rs 399. You’ll Love This Diwali Offer