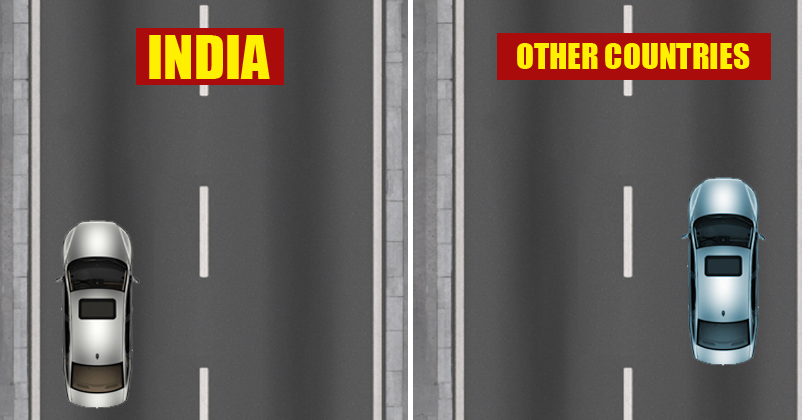 Well, we all know this that there are many countries in the world who prefer driving on their right. India is certainly not one of them. India was once ruled by British who preferred driving on their left. And from that moment itself, the same rule was implemented and accepted by us.

Now lets have a look on the world map which depicts the no. of countries following right and left driving rules. Now if we observe the map, we can figure out that around 20-25% of the world population drive on left and the rest on right.

So the question is, ‘Why do they drive on either left or right’ what’s the reason behind it ? Today’s rule of driving on left evolved from driving livestock and carts in the early centuries. Archaeologists observed deeper grooves on the left lane as the evidence of left side traffic.

Earlier people used to travel on horses, given the fact that around 90% of the riders were right handed, they preferred riding on left so that their right hand be free. This served quite a few purposes for Knights and Swordsmen riding on horses to slay their enemies (G.O.T Fans, Heads Up ! ! )

Now whatever the reasons were other than this, keeping to the left was made into a law in England in 1835. And today most of the countries who prefer driving on left side are India, South Africa or Australia which were once a part of British Colonies ! !

Some people claim that following the French revolution, drivers switched to the right so as to show their protest against the overthrown aristocracy. While other people suggest that French drove right all along ! !

Another theory that people suggest is that other than single horses and everything, people used to travel on carts which were pulled by more than one animal like cows or horse. Since there were a number of them, it was not quite possible for the the driver or the person controlling them to stay on left and steer the cart as it makes the feel “WRONG”. It’s always important to have a straight look on the road. So they decided to make their cart stay on the right while they still whip their horses by their right hand. Driving on the right side of the road did spread across the EUROPE when Napoleon and Hitler imposed their National Driving Rules on conquered territories. While other countries voluntarily switched to their right to align with their neighbors like Sweden in 1967 or Ghana and Nigeria in 1970.

Well, now that’s the reason why you still drive on the left side of the road. If you know some more interesting possible theories regarding this subject, you can for sure share it with us in the comment section below ! !

Continue Reading
You may also like...
Related Topics:Countries, left, reason, right, road, side