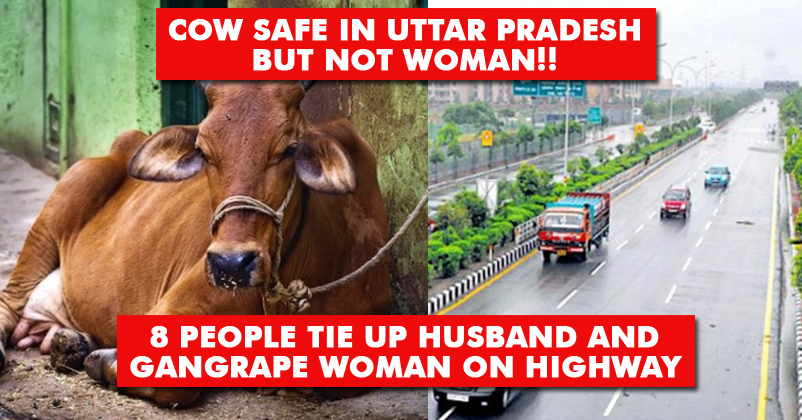 Rapes are very common these days; there’s hardly any place in India which is saved from such disgusting things. However, a brutal incident has come to light in Yogi Adityanath’s Uttar Pradesh; no doubt, the CM is taking many efforts to improvise situations in UP, but this case has come as a shocker. According to reports, 8 men gang raped a woman & that too in front of her husband; yes, they tied him up and brutally raped her. This happened in Jalaun district on the 4th of May, when the couple was returning from Jaipur. After raping the woman, those men robbed them and dumped them on Auraiya-Jalaun highway.

Basically, the couple took a train to Auraiya and from there, they wanted some transport to Jalaun; it was midnight that they had reached Auraiya. While checking some public transport options, a loader van stopped there and the driver offered them a lift.

As soon as the couple got into the van, the driver drove it to a deserted area; when the van stopped at the liquor shop, some more men came in. All of them started raping the woman turn by turn and the husband couldn’t do anything as he was tied up. Moreover, when the couple started screaming, the men threatened them and asked them to keep their mouths shut.

On the 5th May i.e. Friday, an FIR was filed against those 8 men; SC Shakya, the Jalaun Additional Superintendant of Police said, “An FIR has been lodged against eight unidentified men for gangrape and dacoity. We will arrest the culprits soon.”

This is not the first time that a woman has been raped on a National Highway; last year, a 15 year old girl and her mom were raped near Bulandshahr (UP). Some strict actions should be taken as soon as possible so that the number of cases reduces. It is sad to see in that Uttar Pradesh, cows are safe but women aren’t. Even if slight trouble is caused to cows, those “Gau-Rakshaks” leave everything and resort to violence in order to save them; it wouldn’t have been surprising to see Gau Rakshaks killing someone for rescuing the cow. Protection of women is also equally important, don’t you feel so? In UP, people play dirty politics in the name of cows but such serious issues go unnoticed.

Chandigarh Based Engineering Student Asks Narendra Modi To Help Him Marry His Girlfriend
Best Solution For Dirty Toilets! Women Are Now Getting Training To Urinate Standing Up!