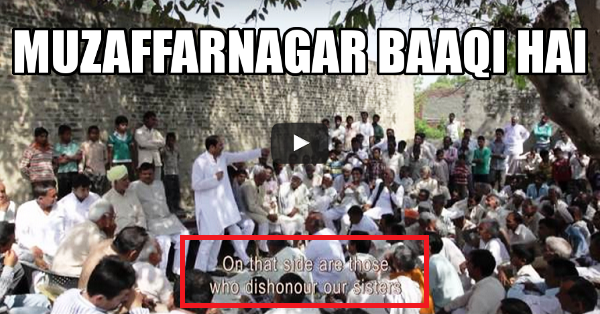 “Muzaffarnagar Baaqi Hai” is movie which is based on the Hindu-Muslim riots taken place in Muzaffarnagar and Shamli districts of Uttar Pradesh in September 2013. This video is a trailer of the movie and gives you an idea what the movie is all about. It shows the plight of Muslim families after the riots and the insensitive attitude of Uttar Pradesh government towards the victims of the riots.

The maker of the video, Nakul Singh Sawhney, wants to show that the whole incident was a planned one, instigated by the BJP leaders, keeping in mind the Lok Sabha elections of 2014. The video also shows that Muslims are not happy with any political party, whether it is BJP or SP or BSP or Congress. One Muslim said the political parties use Muslims as potato, you can add it any dish and it will give the same taste. The Muslims are also angry with SP Supremo Mualayam Singh Yadav as he can spent crores on dancers for a festival but for the families of deceased he has only Rs. 5 lakhs.  When the media person asked the old Muslim men that do they feel cheated by Mulayam Singh, they replied yes and in fact they went to the extent of calling him a BJP agent.

Do let us know you opinion about it in the comments section.

What This Cruel Woman Did With Her Old Mother-In-Law Will Give You Goosebumps
5,000-Year-Old Man Found Living In Uttar Pradesh? SHOCKING!