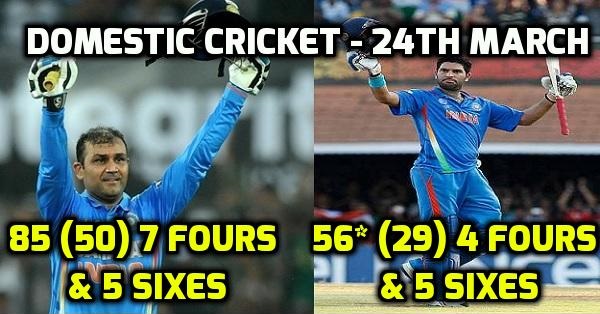 The situation between India and Australia is so gripping and is making our hearts beats a little more faster.

Will it be the Kangaroos or the Bleeding Blue to win.. Whatever be the case, WE are truly missing two great cricketing legend, that is the Mr. Yuvraj Singh and Sehwag.

Just 3 days to go to get the cricket Champion, and I dont know how many have kept a tracked on the Syed Mushtaq Ali Trophy – North Zone. Back here at the home domestic matches, Yuvraj made a fabulous more than half century on 29 balls only. And, Sehwag was in a freak of making runs and did 85 runs off 50 balls.

In Syed Mushtaq Ali Trophy – North Zone, match between Haryana & Punjab was played on 24th March. Haryana scored 151/7 in their 20 overs. Punjab chasing target of 152, responded well with the blasting innings of Yuvraj Singh. Yuvraj scored 56 off 29 balls, hitting 4 fours & 5 sixes. As a result of Yuvraj’s blistering innings, Punjab scored 152/3 in 15.4 overs only. Yuvraj was declared as Man of the Match.

In another match between Delhi & Jammu on 24th March, Delhi cruised to victory with the help of Sehwag’s storm. Delhi batted first and scored 159/6 in 20 overs. Sehwag scored 85 off 50 balls, hitting 7 fours & 5 sixes. Jammu & Kashmir team was only able to score 133/7 in their quota of 20 overs. As a result Delhi won the match by 26 runs. Sehwag was declared as Man of the Match.

We are surely missing these two cricket magnums and so desperately wish to see them in action on field in International Level.

We want them back and We wont give it back either.

Lets all Bleed Blue and cheers to the Indian Cricket.

Breaking News – Watching India Vs Australia Made Compulsory By Panchayat In The Village
One Match Lost, And This Is How India Reacts, Surprisingly True