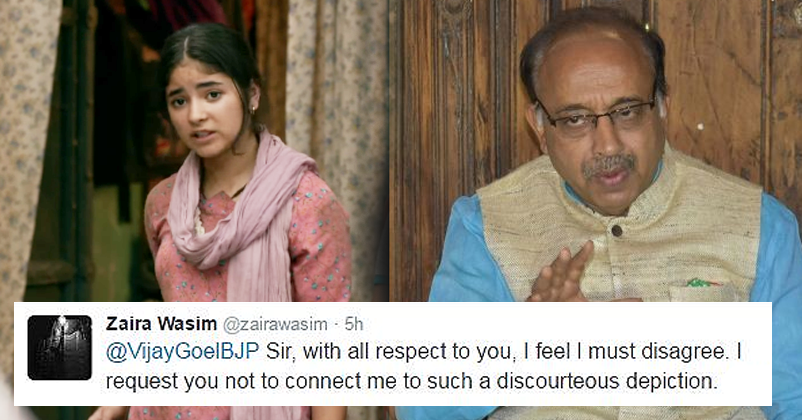 Zaira Wasim is busy gathering all the appreciation for her mind-blowing performance in Dangal, but poor girl has become a target of unnecessary controversies. Couple of days back, we reported about her meeting with CM of J&K Mehbooba Mufti, after which she was miserably trolled on all social media platforms and forced to apologize. After that episode got over, there’s something fresh for Zaira. This time, the Sports Minister Vijay Goel made such a comparison, which didn’t go down well with her.

Well, he compared Zaira with a painting and if you are her fan, even you’ll be pissed off. This made the 16 year old girl very furious and she hit back saying she’s in no way connected with that paint. The Sports Minister tweeted the photo from an Art Fest in Delhi; it featured a woman in Hijab and also another one in cage.

Instead of keeping mum, the Dangal girl asked Vijay Goel to not compare her with such a “Discourteous depiction”; yes, these were the words she used. As soon as Zaira saw this tweet, she immediately hit back! Vijay Goel tried to give clarifications after seeing these tweets by Zaira! How far do yo think this was right? She’s just a 16 year old girl and it’s not at all ethical to make her a victim of such sensitive issues. Don’t you support Zaira? Do share your views in our comments section below.

Cobbler Fan Made Special Shoes For Shah Rukh & You Won’t Believe What SRK Did
Bigg Boss 10: You’ll Be Heartbroken To Know Which Contestant Is Evicted This Week!