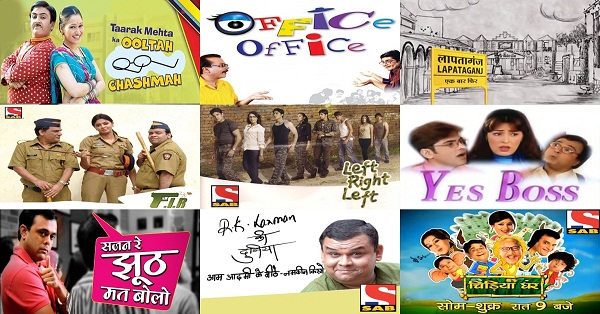 SAB TV is known for its lighthearted TV shows, it has become one of the most watched channel all over India.  Earlier the channel was started as a general entertainment channel, but in 2003 the channel decided to air and showcase only the comedy themed shows, thus becoming a comedy-centric channel. SAB TV has formerly broadcast many popular programmes like Office Office, Yes Boss, Lapataganj and a lot more shows that were critically acclaimed, and entertained the audience thoroughly.

So now let’s take a look at the 10 Best SAB TV shows of all time.

Note: This list contains the original SAB TV series, shows like Zabaan Sambhalke, Alif Laila are not included because they were originally aired on other channels like DD Metro.

The predictable number one on the list. Without a shadow of doubt this show tops our list. Based on column Duniya Ne Oondha Chashma written by columnist and journalist Taarak Mehta. This show has everything a great show needs. Set in the backdrop of Gukuldham Society, this show revolves around the different families living together. This show promotes themes like love, unity, culture, and care for each other. Taarak Mehta has now become the flagship of the SAB TV. A comic satire on the prevalent corruption in India. This show revolves around Mussadilal and his encounter with the corrupt people in the public offices. This show was very well received, praised for its story on unrestrained corruption and bribery that a common man has to face in his everyday life. This show has won Pankaj Kapoor numerous awards for his portrayal of Mussadilal. Based on the Sharad Joshi’s novel of the same name. The story is about a small imaginary town called Lapataganj, the town struggles for the basic facilities like water, electricity, but the people of the town are still the happiest ones. The show highlights the spirit of a common man and his desire to lead a happy life against all the odds. What could be said about this show! The characters like Gopi and Billu won our hearts by their stupidity. Whether it’s the badass Chandramukhi Chautala or the amnesic Billu, the characters were one of a kind. The strangest of the cases that we have ever seen, this most unusual grammar we have ever heard! (Well bro, what is the matter is the, maine padosi ko likha letter is the.) This show will remain memorable for a long time. Although it’s not a comedy show, it was a bit different from the SAB TV’s usual programming. Nevertheless this show was a unique concept for the Indian TV. This is a story about six bewildered, dis-oriented cadets in an Indian Army academy, facing obstacles in their way, yet overcoming the challenges and stand still. It’s about the love and dedication of the youth towards the country. A show set in the backdrop of a news channel that explores relationships, aspirations and humor. The story revolves around Mohan, Meera and Vinod. Vinod is the chief editor of the company where Meera works as a chief reporter and Mohan as the junior supervisor. Vinod has a crush on Meera, Meera is married to Mohan and this secret is concealed from the world. Now it’s up to Mohan to save his wife from the flirtatious and keeping his job safe at the same time.

All’s fair in love and war. Aproova falls in love with Aarti who is the daughter of his boss. Aproova lies to Aarti and Dhirubhai (Boss) about his family. What follows is a comedy of errors, one lie after another…and another…and another. Apoova’s best friend Raju builds up a fake family and Aproova-Aarti get married. The humor portion of the show arises from the situational lies and liars. Aproova must now hide the truth of his fake family from Aarti and Dhirubhai, in order to keep his marriage intact. Another show on the list depicting the life of The Common Man. This show is based on the cartoons of famous cartoonist R.K. Laxman. This show tells the story of a common man who is a silent observer of the changing times. He witnesses everything; the scheming politicians, the greedy officials, the gossiping housewives. This character of common man is something that every Indian can relate to. The best thing about most of the SAB TV shows is that along with the fun part, they teach us the moral values and ethics. Chidiya Ghar is a perfect example of such programmes,  it teaches us many important things like how we should be compassionate towards others, to have the character traits like honesty and love. This show educates how people should live with unity in a house, respect the elders and show manners. This dramedy revolves around Jugni who comes down all the way from the US to change the conservative outlook of her boyfriends family in Jalandhar, India. Jazz who is madly in love with Vicky, Vicky knows that his father will never accept an educated girl as his bahu. But love knows no limits, Jazz transforms herself into Jugni. Jugni must now overcome all the trails and tribulations in order to win Vicky’s love.

10 Ridiculously Insane And Hilarious Offers You Would Find Nowhere But Only In India
KRK Banged “Bangistan” On Twitter! You Can’t Miss To Check Out These 11 Tweets