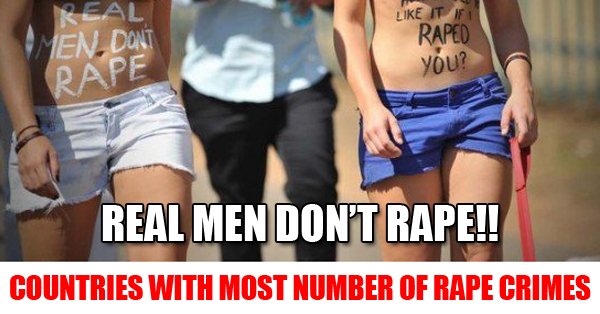 Rape is a forced crime which is popularly growing in developing nations and also in nations often facing civil war. However the civil law and the government is unable to protect the people and stop the rape crimes in the country.

South Africa has been considered as one of developed nation in African region while it has the seventh-highest per capita income in Africa. As per the recent studies, crime rate in South Africa is highest than any other countries in the world. Rape incidents are nearly 132.4 per 100,000 citizens which is quite higher. Botswana is located in southern Africa with a overall population of just 2 million people. The crime rate here is 92.9 victims among 100,000 inhabitants making its highest rape crime nation. Lesotho is located in South Africa and is one of the poorest countries in the world with most of the people living below poverty line. The latest figures shows that the numbers of registered rape cases are nearly 82.7 per 100,000 citizens Rape cases are also common in this region and registered cases are 77.5 among 100,000 people which are high as compared to other countries. Recent study says, the number of rape cases in the country has increased in last few years. Bermuda is located on the east coast of north America and has number of rape cases as high as other countries. According the latest figures, the country estimates to have67.3 rape incidents per 100,000 citizens. Sweden is the third-largest country in European Union which covers an area of 175,896 sq mi having total over 9.7 million inhabitants. The number of rape has come down in few years and now it is 63.5 per 100,000 citizens. Suriname is located on the northeastern Atlantic coast of South America , where crime is common including murder and kidnapping cases. According to an estimate 45.2 female became victim among 100,000 people. Costa Rica is a central American country with progressive inhabitants there. It has been one among those countries to attain higher human development but it always marks its name in highest number of rape. The estimated figure is 36.7 victims per 100,000 citizens. Nicaragua is the largest country in Central American isthmus Nicaragua with Africans, Asians and indigenous people living together. According to the latest statistics, the rape incident per 100,000 citizens is nearly 31.6. Grenada is an island country located at the southern end of Grenadines in southeastern Caribbean Sea known as Island of Spice. It produces nutmeg and mace on large number and is considered as largest exporter in the world. The rape crime is nearly 30.6 per 100,000 citizens. Continue Reading
You may also like...
Related Topics:10 Countries With Maximum Rape Crimes According To 2015

12 Books That Bill Gates Think Everyone Should Read
Here Are The Funniest Comments From Narendra Modi – David Cameron Viral Pic..!!