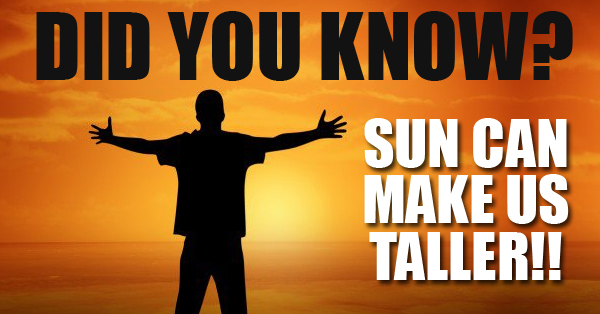 We see it every day and its probably one of the most important and necessary thing needed for the existence of life. But how much do we actually know about Sun? Ok, so you probably know at least a few things, but not the things we are going to tell you right now. Source
Every second the sun gives off the same amount of energy as 10 billion nuclear bombs. To just give you a hint, only few hundred of nuclear bomb is enough to destroy our whole world. Nuclear weapons are more powerful now than they were in the time of second world war.

Source
All the energy used by man since the dawn of civilization is roughly equal to 30 days of the sun’s energy. Yupe that’s all it is for the Sun. Source
Every year our planet Earth absorbs 94 billion megawatts of energy from the sun. That’s more than the world’s total energy need. Source
We all know that the sun can be yellow or orange but did you know that it can be green also? This phenomenon is known as green flash is very rare. Source
It takes energy in the sun’s core about 1 million years to reach the surface. Source
Well, it’s massive, it is really huge check out the picture above. In fact, it accounts about 99% of the mass of the entire solar system and all the other planets and star or anything in our solar system is just 1% of our total solar system mass. Source
Most photos captured  and what we see suggests that the sun orange, red, yellow or a combination of the three. But in reality, the sun none of them it is white.  It appears yellow to us because of the blue light present in the Earth’s atmosphere.

8. The Sun can make us taller Source
When the sun and moon are in a apogee, or pulling the Earth in the same direction, our bodies get stretched but only microscopically. Source
At least that’s what people used to think back in the days. One legend said it was a man with 3 eyes and 4 arms that he was abandoned by his spouse for being too bright and shine. Source
Ok, so you knew that sun is really bright, but did you know that it is brighter than about 85% of everything else in the entire Milky Way?

This Is What Bollywood Female Celebs Tweeted About Sunny Leone’s Recent Interview!
Kerala Man Feeds Hungry Street Kids In A Restaurant But Got Shocked Seeing The Bill