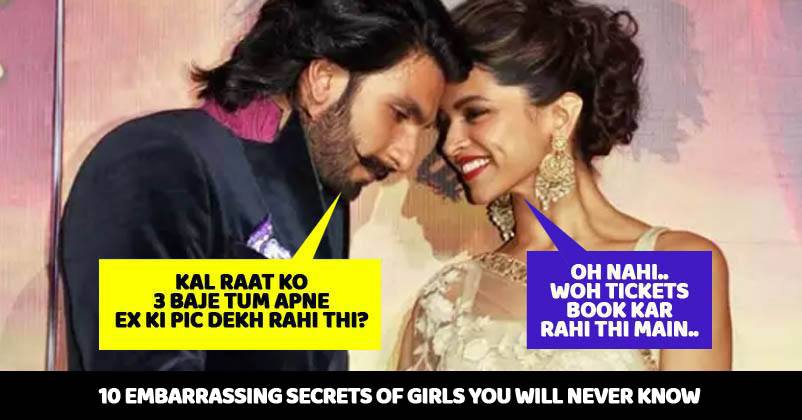 A girl is the most unpredictable creature God has ever created and there’s absolutely no wonder that sometimes she herself can’t justify her act as to what she did and why. Agree or not, it’s true! In fact, some people hilariously say that understanding girls is so complicated and difficult that even God doesn’t try to do it. LOL 😀

Jokes apart, if truth be told, they are among the loveliest creatures found on this Earth as they are not only pretty from outside but also beautiful from inside. At the same time, it’s also equally correct that there are many secrets that they don’t share with anyone, especially with guys!

In this article, we will point out 10 such things that girls do secretly but don’t want guys to know about them:

1. Making weird poses or faces in front of mirror:

Girls do the craziest things in front of mirror, such as giving flying kisses, ramp walk, trying some dance steps, making faces or different poses. To sum up, mirror is a girl’s secret keeper that sees her when she looks the most beautiful as well as shabby.

Girls always want to look pretty and wish people to admire their beauty. Even in their random pics, they want to look beautiful and that’s why they keep on clicking photos until they get a satisfactory and perfect one. After clicking one such pic, they show it to all and say, “bas aise hi baithe-baithe kheench li”.

3. Stalking their ex on social media or enquiring about them from a common friend:

Even though girls pretend that they have forgotten their past and have got nothing to do with their ex now, they actually stalk their exes on social media or make inquiry indirectly regarding them whenever they get a chance. A possible reason for this is that they might want to ensure that they are leading a better life. What’s more, a girl also wants to know what’s going on in the life of her ex and which girl he is dating after separating with her.

Girls are considered to be quite hygienic and they might say “eww” when they see a guy picking nose. However, the truth is that they too pick nose when they are alone in room or when no one sees.

5. Trying to fart slowly so that no one notices:

Just like guys, girls too fart and there’s nothing shocking about it. However, they don’t want people to know about it so they try to do slowly and in a way that no one gets to notice. If they are in crowd, they will make an excuse and move little far way or attempt to make the least possible noise. However, when they are alone, they are utterly comfortable with a loud and smelly fart.

6. Taking off bra at night or as they return home:

Although girls pretend that they don’t like adult stuffs, many girls actually enjoy such jokes and like to watch adult films in the same way as guys do; however, they never accept it openly. It’s also not surprising that they indulge in self-satisfying act after getting pleasure from the adult movie but won’t admit it.

8. Shaving only the required part:

Like guys, girls too have hair on their body parts and to wear short clothes, they usually shave it off; nevertheless, if they need to wear a dress which is of knee-length, they shave hair till that part only. But they will never let you know it! Sshhh..

Girls secretly check out guys whom they find cute, hot or attractive. They even discuss about him with their friends and this all takes place in a way that even the concerned guy doesn’t get to know about it. Besides, a girl also stalks her crush and keeps a record of his every activity.

10. Touching body parts and examining them when alone:

No matter how weird it may sound, it’s true that girls touch their body parts when they are alone, examine them and compare them with other girls. They also try different poses such as how they will look in a bikini or a short dress.

Do you know more such things? Add to the list!