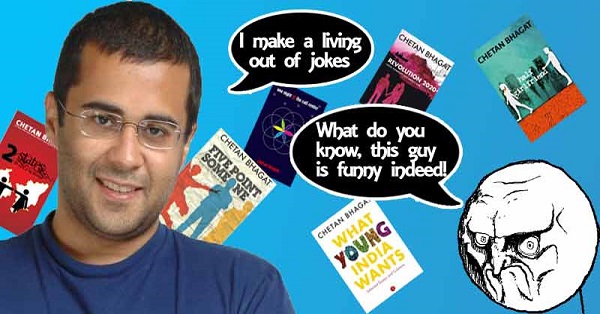 Chetan Bhagat, the self-acclaimed novelist, who started his career as a writer with his first novel, Five Point Someone is liked and disliked by people. There are people who eagerly wait for his next novel and there are people who wait for his next novel, not to read but troll on it. For some people, all his novels are a short story on college life plus an explicit sex angle. Even after being a disappointment to many avid reader, his books managed to be scripted and made into movies, may be because the story line of this books is more like Bollywood masala movie. This popularity even got him to judge a dance reality show, however, if he had given audition for the same, damn sure would have not even made it to round2 of auditions.

Anyways, as they say “Badnaami main bhi naam hai”, Chetan Bhagat tends to prove this right.
Here are some of the funniest memes on Chetan Bhagat, that have gone viral. Any person, who is not into the habit of reading books or not good at vocabulary can decipher his novels. Think he should try something better to get real “book lovers” follow him. It is rightly said, if you plan to read his novel, please let your brain go to sleep Wonder if he can pull off serious stuff like corruption and country’s laws. Writing a column on these might not make people take him more seriously. He even judged a dance reality show, which made many people quit at the auditions itself And he performed too. 🙁 Even KRK was good with his comment for a change. Last but not least, I hope he doesn’t try too hard on “Making India Awesome”! hehe

10 Dialogue’s Every Indian Aunties Say.
These 10 Survival Hacks Could Save Your Life Some Day