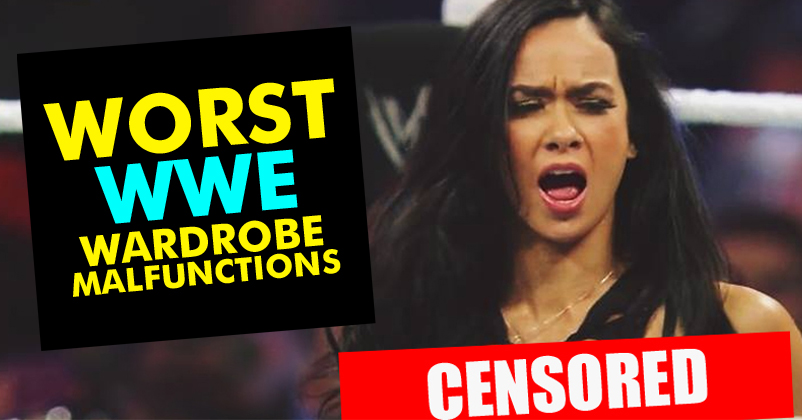 Everyone is familiar with the name ‘WWE’ which stands for World Wrestling Entertainment. Many of us have grown up watching professional wrestling, as a kid we even tried doing the wrestling moves on our friends and siblings in the backyard or on the bed. WWE is the biggest name in the domain of wrestling, a huge entertainment industry dealing primarily in professional wrestling. Over the time numerous people have called WWE a fake, accused them of cheating in the name of Wrestling.

WWE is scripted, it’s not fake. The matches are choreographed, they have expert creatives who plan the feuds between the superstars, write a story-line. The results of the matches are predetermined. Superstars are informed about how a match will be finished, what spots to pick, what moves will be used.

But not everything in WWE is predetermined and scripted, many accidents can happen which are not part of the script. There are a lot of embarrassing moments that happened with the WWE Divas which were not a part of the script. When the wrestler’s outfit decided to be their worst enemy. Just last week on SmackDown, Eva Marie was supposed to make Smackdown debut. She suffered a humiliating wardrobe malfunction – her top’s straps popped off, her assets were at the risk of exposure, but she quickly covered it with a towel.

Let’s all take a close look at some of the worst times when WWE Divas had to face the embarrassment due to their wardrobe malfunction.

On her way to the ring, Lilian Garcia, who was wearing the pretty purple dress and silver strap back heels, almost fell to the ground when the strap on her left shoe broke. She tripped over the pyrotechnic equipment on the top of the stage and fell down on the ramp, she landed on her knees.

During a promo segment between AJ Lee and Stephanie McMahon, Kaitlyn interrupted them. She attacked AJ and it all went south. Big E came to AJ’s aid, he dragged AJ out of the ring by her heels. As a result of this, Kaitlyn’s attire came loose, her nippy popped off her top, which she quickly put it back before everyone could notice. During a segment of MIZ TV where The Bellas were invited as the guests. Brie Bella was sitting on a chair in the middle of the young and then something surprsing happened. Her left breast popped out of her dress. She was embarrassed, she even took this to the Twitter where she apologized for falling out of her top. During an episode of WWE Main Event on the WWE Network, wrestling fans got a lot more than they expected to see. A tag team match happened between the four of the divas. The team of Summer Rae and Layla against Natalya and Rosa Mendes. As Rosa and Layla wrestled outside, Rosa was on the apron, entering the ring, but Layla grabbed Rosa’s tights and pulled her back. As a result Rosa’s buns became visible on the live network. On an episode of Smackdown, AJ teamed up with Dolph Ziggler to take on the team of The Great Khali and Natalya. After hitting Natalya with her finisher and pinning her, she popped up, her t-shirt came up revealing the underneath bra she was wearing. This could have been worse if she wasn’t wearing that. After Edge became WWE Champion for the first time in his career at New Year’s Revolution 2006. After he successful cashed-in the very first Money in the Bank briefcase. He ended the nine-month title reign of John Cena. To celebrate his victory, he organized a live SX celebration with Lita. The segment involved both stripping, getting into the bed. John Cena interrupted the celebration, during the motion, Lita’s left breast became visible to the audience. At Wrestlemania 30, Vickie Guerrero set up a match which involved every woman on the roster fight for the Divas’ Championship, and the first woman to score the pin victory will become the champion. Cameron’s top opened up from the back after she delivered a supplex. She completed the match by holding her top onto her body. Triple H was the babyface when he returned from his quad injury back in 2002. Stephanie was the most hated heel who has aligned herself with Chris Jericho. On an episode of RAW, when Stephanie was about to take a pedigree from Triple H on the announcers’ table, she came out of her top, her right breast popped up. She could barely adjust herself as her hands were behind her back. During the Attitude Era, the most famous wardrobe mishap happened during a tag matcg. Sable and Christian took on Jacqueline and Marc Mero in a mixed tag team match Capital Carnage. There was a heated feud between Sable and Jacqueline, so during the match Jacqueline accidently end up sitting on the shoulders of the refree. Sable grabbed the chance and she pulled and tore the shirt of Jacqueline, leaving her bare-chested on live television. During a match against Torrie Wilson at Judgment Day in 2004, Torrie went for a roll-up pin on Marie. She pulled her tights for extra leverage, as a result her long pants were ripped all around her waist. Even after this mishap, Dawn continued the match as a professional.