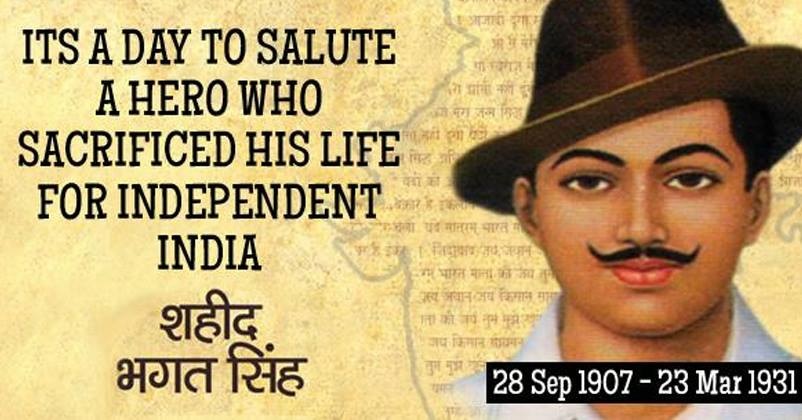 Indian freedom struggle wasn’t easy. We got the independence at the cost of life of many great revolutionaries of the time who took up the reins of getting India free in their hands. The dreams of free India were actually seen by them in those oppressive times. The great Shaheed-e-Azam Bhagat Singh is no new name for any Indian. 2. At the age of 8 he thought of releasing India from Britishers and had left the home at age of 15!

A photo of Bhagat Singh at his home.

Bhagat Singh left home for Kanpur when his parents tried to get him married. He said, “My bride shall only be death” if he had to marry in slave India. He joined the Hindustan Socialist Republican Association.

3. He also worked for the newspaper “Pratap” while he was in Kanpur He worked under the guidance of ‘Ganesh Shankar Vidhyarthi.’ He was also the regular writer of the magazine “Kirti” in Urdu and Gurumukhi language.

4. Bhagat Singh requested not to be hanged!

Bhagat Singh asked that instead of hanging him he must be shot dead, but it was not considered by the Britishers at all.

5. He considered Kartar Singh Sarabha as his path-maker

The death of his guru had changed Bhagat Singh’s life totally.

6. While he was in the jail he had written the theme of the book “Dreamland”

The book was written by Ramsaran. The content of the book include violence, non-violence, religion, etc. He was an expert in reading and writing Hindi, Urdu, English, Punjabi and Gurumukhi at a very early age.

8. He moved the world with his fasting He kept fasting for 116 days even though he used to do his all the work regularly such as singing, reading books, writing, visiting court, etc

9. He raised the word Political prisoner He was sentenced to be hanged on 24 March 1931, but it was brought forward by 11 hours to 23 March 1931 at 7 o’ clock in the evening and his mortal remains were burned beside the Ravi River.

11. Legend says, Bhagat Singh marched to the gallows with a smile on his face His one last act of defiance was shouting “Down with British imperialism.”

12. British feared him even at his time of death

It is said that no magistrate was willing to supervise the hanging. After the original death warrant expired it was an honorary judge who signed and oversaw the hanging.

Continue Reading
You may also like...
Related Topics:Bhagat Singh, BIRTHDAY, Shaheed Bhagat Singh, These 12 Interesting Facts About Bhagat Singh Every Indian Must Read

20 Freedom Fighters Who Proved They Fought As One Nation, Beyond Religion
12 Staggering Inventions That Were Made By Indians That Definitely Make Your Day