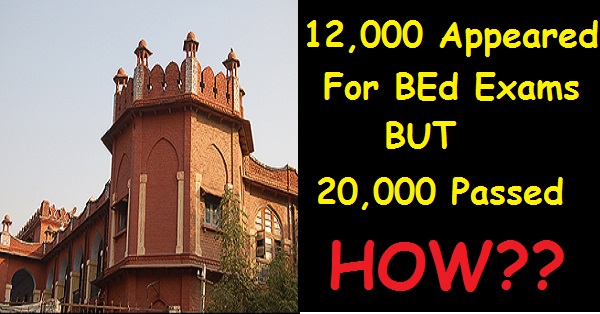 BR Ambedkar University staff and officials of Agra were in a total shock when the results of BEd examinations were about to be released. It is learned that when around 12,800 students of regular stream enrolled for the exam in the university, 20,000+ students passed in those exams. Keeping this in mind the officials had withheld the results of these exams. The vice chancellor of BR Ambedkar University ordered for a probe which may lead some legal actions against several private college officials. Speaking to TOI on saturday , Prof Manoj Srivastava – spokesperson of the University said – ” Mohd Muzammil Vice Chancellor of the University had ordered a probe and the committee will enquire the private colleges. The University has also issued letters to the Private institutions regarding the 7000+ students, who they are and where did they study.

The matter of 7,000 suspicious students came into limelight when the private agency preparing the BEd results objected that they only had the data of around 12,800 students while copies of over 20,000 students were checked. As the agency showed helplessness in declaring results, the Vice Chancellor issued letters to all the private colleges, asking them to come up with the list of enrolled students. Private colleges then claimed that they had taken more students against seats lying vacant and these extra students also took the exam.

Another shocker came after this incident, on inquiry in the respective private colleges, it has been figured out that extra suspicious students never studied in these colleges and they never passed any entrance exam. They have been enrolled in private college just few days after exam and some might have enrolled just one night before exam.