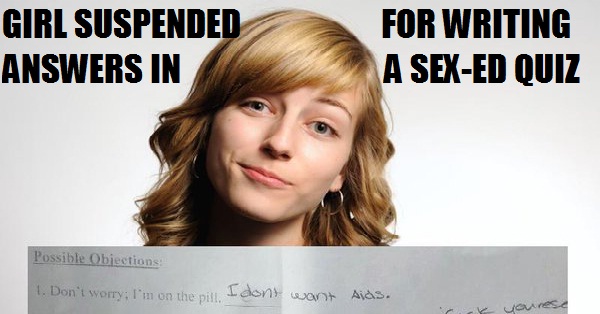 In India forget sex-education, talking about sex is considered taboo here. Whereas other countries follow a strict tradition of providing sex-education to teenagers in school which helps them understand the issues relating to human sexuality.

But having too much information than you should at your age could be injurious too. This is what happened with a 14 year old girl at a sex-ed class quiz. This 14 year old girl was given a test where she had to provide answers to a partner’s excuses who doesn’t want to use condom while having sex.

Read the hilarious answers below Well she should be a marketing head for a condom company or an ambassador for “KNOW AIDS – NO AIDS” campaign. But looking objectively, the girl nailed the test. The point of the quiz was to provide answers to a partner’s excuses who wants to have sex without using condom. Speaking as a man, if a woman says these things to a guy, he would shut up and do whatever she wants him to do. The girl should have been given a prize for her straightforward answers and probably the answers a sensible woman would give to man who doesn’t want to use condom while having sex.

But just because the 14 year old girl used some f words, the school suspended her and said the answers were not appropriate for the test.

What’s your take on the school’s decision to suspend the girl for her answers. Did you find it unappropriate? Let us know in comments section below.

OMG! It’s finally here!! Couples are Making Out In Bigg Boss 9
10 Reasons Why DUBSMASH Is Pissing Off Rational People