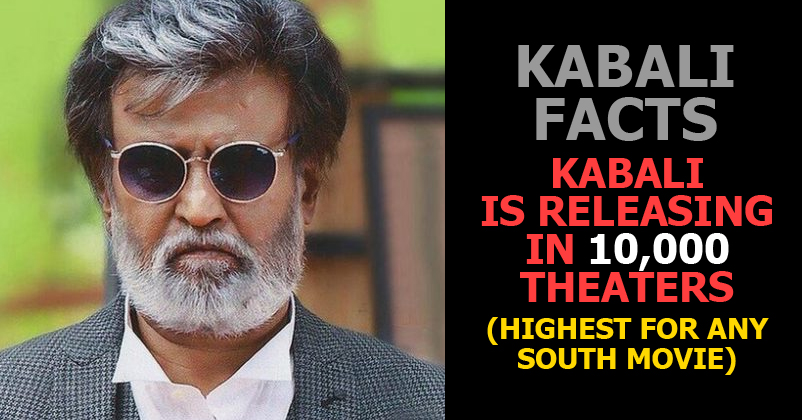 Kabali is one of the much-awaited movies of 2016 in the Indian film industry. Rajinikanth and Radhika Apte are doing the lead roles in this film. This is the Rajinikanth’s 159th film and it is considered to be a very important one in his career after the dull box office collections of Lingaa & Kochadaiyaan. Kabali is a gangster-drama film which is written and directed by Pa.Ranjit. The major part of the film was shot in Malaysia, some smaller scenes in Hong Kong & Bangkok. Kalaipuli S. Thanu of V creations is the producer of this most anticipated film and the budget of this film is around 100 crores.

Kabali is releasing worldwide on 22nd of July. So, here presenting you 15 astonishing facts about the most awaited film.

1. Rajinikanth will be playing the character of Don in this film. Last time he played the same role was in 1994 in the film Baasha which was a blockbuster 2. This is the first Tamil film to be dubbed in Chinese, Malay, Thai & Japanese languages 3. Kabali is releasing in 10,000 theaters worldwide, most for any South Indian film 4. Satyam Cinemas in Chennai is having 99 shows and Mayajaal Multiplex is having 119 shows for a opening day which are sold out. 5. The film’s budget is around 100 crores and the producers are expecting a collection of Rs. 200 crores in the first 3 days

Experts feel that it can earn about 700 crores if the film lives up to the hype. 6. Interestingly, there is no official Trailer from the film unit till date. However, the 1-minute teaser has stormed the YouTube with 2.6 crores views making it the most viewed in the history of Indian cinema. #KabaliDa 7. Malaysian fans provided 25 luxury cars to the film unit for the fight sequence 8. For the first time ever, an airline has painted a film theme on their air crafts

Here’s the making of Kabali livery: 10. Muthoot Fincorp has embossed the face of Rajinikanth on silver coins making a deal of about 40 crores. 11. PVR partnered with Kabali and thereby became the first multiplex to hold a tie up with a regional film. 12. Kabali is being released in 400 screens in the US and the tickets for the entire weekend were sold in less than an hour. 13. At the age of 65, Rajinikanth performed the car drift sequence without a dupe says the Kabali fight master 14. Kabali is the first Indian film to be screened at Rex Cinemas in France which is the largest cinema theatre in Europe. 15. Some start-up companies in Chennai have declared a holiday on the release date. John Cena Uploaded A Picture Of Virat Kohli For A Reason That Has Nothing To Do With Virat Kohli
Bua Is Back! This Is Why Upasana Singh Once Again Joined ‘The Kapil Sharma Show’!