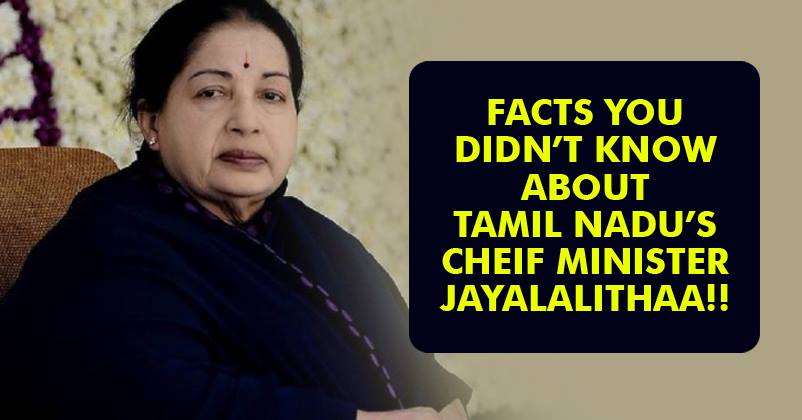 Jayalalithaa, popularly known as Amma was born on 24th February 1948 in Mandya, Mysore State, Dominion of India. She was a film actress before she made her way into active politics. Her acting career spanned from 1961 to 1980 and she appeared in 140 films. As a leading actress, she starred in Tamil, Telugu and Malayalam films. Jayalalithaa is known as the queen of Tamil Cinema because of her prolific acting and dancing skills. Many believe that MGR introduced her into the politics. In 1982, she joined AIADMK which was founded by MG Ramachandran (MGR). After the death of MGR, Jayalalithaa emerged as the important political leader of the Tamil Nadu.

As she is battling for her life presently, here we present you 15 things you need to know about Amma.!! 2. She was born in Mysore and not in Tamil Nadu. 3. As a child, Jayalalithaa had a fan-girl crush on cricketer Tiger Ali Khan Pataudi
She used to go for his matches along with binoculars just to watch him. 4. She is trained in Bharatanatyam, western classical piano, classical music and other forms of classical dance. 5. She is fluent in Kannada, Telugu, Tamil, English, Hindi and can understand Malayalam. 6. As she is fluent in English, MGR wanted her to be a member of Rajya Sabha from AIADMK. 8. After MGR’s death, AIADMK split into two groups, one supported Jayalalithaa and the other supported MGR’s wife Janaki. 9. Jaya contested in 1989 elections and become the first woman to be elected as Leader of the Opposition. 10. Jayalalitha was attacked brutally and molested by DMK members on 25th March 1989 in front of Chief Minister Karunanidhi and Assembly speaker.

She left the assembly with her torn saree and this brought a lot of sympathy for her. 11. In 1991, Jayalalithaa became the youngest and the first female Chief Minister of Tamil Nadu to complete a full 5-year term. 12. She resumed office for 5 times. Her tenure of 5228 days is the second most by any female Chief Minister of India next to Sheila Dikshit (5504 days). 13. She introduced police stations which are fully operated by women and established 57 all-women police stations across Tamil Nadu.
Jaya did a lot of good work, especially for women. She also introduced 30% reservation for women in all the police jobs. There are many all-women establishments by Amma in her tenure like banks, stores, libraries etc. 14. Jayalalithaa is the first and only incumbent chief minister of India to get disqualified from holding the office because of the disproportionate assets case in 2014.

However, on 11 May 2015, she was acquitted from the case by Karnataka High Court and was re-elected as the Chief Minister. 15. Jayalalithaa holds the world record for hosting the largest wedding reception in the Guinness Book of World Records.
She organized a lavish wedding with over 1,50,000 guests for her foster son Sudhagaran in 1995. Continue Reading
You may also like...
Related Topics:15 Things You Should Know About Jayalalithaa.!!, Amma, Jayalalithaa, Tamil Nadu CM

Kejriwal Says PM Modi Did A Scam Worth 8 Lakh Crores In 2 Years On The Basis Of These Facts!
Rahul Gandhi Revealed Full Form Of Paytm & Linked It To Modi! Twitterati Reacted In No Time!