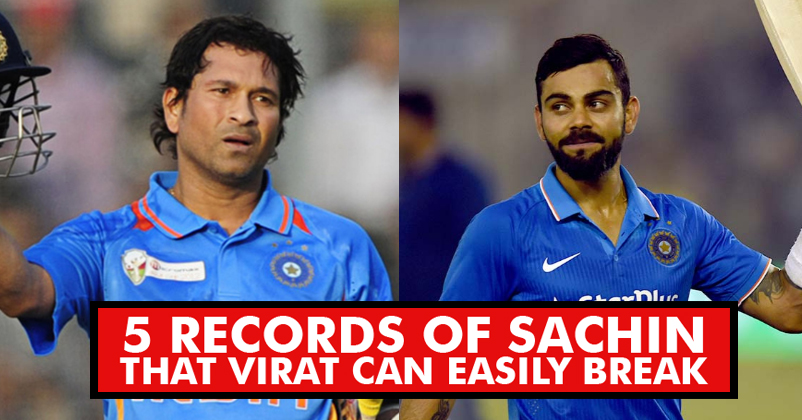 Sachin Tendulkar is the king of world cricket. The range of contribution that Sachin had for the upliftment of Indian cricket can’t be compared to anyone else. Sachin Tendulkar is known as “God of cricket” as he is the reason for the young generation of India to play cricket for the country. Sachin has made India proud many times with his exquisite performances. At present Virat Kohli is emerging as a great batsman and amazing leader, he has conquered the hearts of every cricket fan across the globe. No doubt that the way he is performing, he can achieve anything. Though it’s very early to say that Virat Kohli will break Sachin’s huge records, but the way Virat Kohli is going, he can surely surpass some of the milestones created by Sachin Tendulkar. But, Virat Kohli has always said that it’s unfair to compare him with Sachin Tendulkar as I have always followed him from childhood.

Let’s have a look at some the records of Sachin Tendulkar that Virat Kohli can break in the future. Sachin Tendulkar scored 10000 runs in the 266th match of his ODI career. On the other hand, Virat Kohli has played 179 matches till now and he scored 7755 runs. Virat requires only 2245 runs to score in 87 innings. The way Virat Kohli is playing at the moments, if he continues to play with same consistency, he can easily break the record of fastest 10000 runs in One Day Internationals. With the current average, Virat can reach the mark of 10000 runs in only 38 innings which is 49 less than Sachin Tendulkar. Virat Kohli has been very consistent in his performance for a very long time now, he is continuously improving in every aspect of the game. He has scored more than 1000 runs in the calendar year 4 times in his career so far. On the other hand, Sachin Tendulkar has done this 7 time in his whole career. So, this record of Sachin Tendulkar is likely to be broken by Virat Kohli in the future.

3. Highest man of the match awards This is yet another record that Sachin Tendulkar holds. In 664 international matches, Sachin has collected 76 player-of-the-match awards, 14 of those came in Tests and 62 in ODIs. On the other hand, Virat Kohli has already won 30 Man of the match awards in only 248 international matches. He has won 2 Man of the match awards in Tests, 21 in ODIs and 7 in T20Is. The consistency shown by his tremendous player is just remarkable.

4. Most hundreds against one team. Continue Reading
You may also like...
Related Topics:5 Records Of Sachin Tendulkar That Virat Kohli Can Break!, Kohli, Sachin

10 Muslim Freedom Fighters Who Fought For India’s Independence
Here’s What The Blue Line Below The Views On YouTube Video Indicates!!