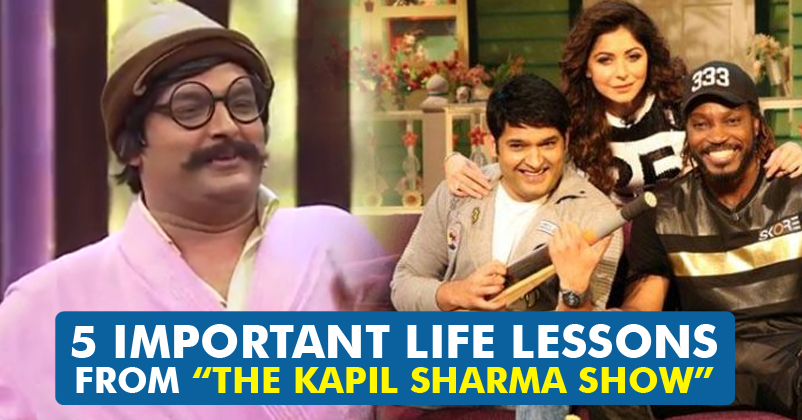 Everyone is familiar with the king of comedy Kapil Sharma and his very popular ‘The Kapil Sharma Show’. Every weekend we tune in to watch the show to entertain ourselves and to relieve the stress caused by exhausting work schedule, looming deadlines and life’s worries. The show makes us feel refreshed, it makes us smile in the worst of times. Unlike many of the shows on the television that promote profanity, nonsense in the name of entertainment, Kapil’s show is different. It promotes peace, it spreads happiness, and makes people laugh. So let’s take a look at 5 Motivating Life Lessons From ‘The Kapil Sharma Show’!

1. Laughter is the best medicine! If Laughter is a strong medicine then Kapil Sharma is a brilliant doctor. Laughter draws people together in ways. Admit it, the show entertains us, it brings a smile on our faces, it makes us forget all our stress and worries. The acts of the show are hilarious, engaging, and positive. Just watching the show makes us feel refreshed and renergised. So if you are suffering a case of the blues then this show is the remedy. We have all encountered things in our lives that didn’t happen the way we wanted them to. Life is full of uncertainties, you cannot plan everything, so what you do? You just go with flow, you become creative and work what you’ve got. If you watch any episode of the show, you’ll see how sometimes their jokes go flat, amazing puns and hilarious acts didn’t work out the way they planned. So what do they do? They improvise, they experiment a lot during the show. They laugh at their own jokes, this makes it much more interesting. So always be full of spirit.

3. Confidence comes from within. You know confidence comes from the inside, you can spend your entire life seeking approval from the others. Firstly you have to become comfortable in your own skin. You don’t need others to tell you that you’re pretty, that you’re successful, you don’t need your values to be defined by others. Kapil Sharma completed his studies in a Hindi medium school and college, his English isn’t really good. But that doesn’t stop him from speaking English, he makes mistakes, he learns, he gets better. The reason why he has the best sense of humor is because he’s confident, he’s fearless, he keeps experimenting with his jokes. Surely the name of the show is ‘The Kapil Sharma Show’, but you can’t deny the fact that if it weren’t for the rest of his team, the show would never have been a hit. Every weak people tune into the show to watch Dr. Gulati with his unconventional medical treatments, to see Bumper show her cool dance moves, to see Chandu getting insulted by the celebrities, we all love all the characters of the show. Even Kapil Shamra takes a back seat and let the other characters take the stage. Kapil is such a good team player, he doesn’t hog all the spotlight. He is not jealous when his co-stars perform well, he feels happy because the ultimate goal of his show is to make the people laugh. Don’t lose the spark of craziness in you. Life is pretty crazy and if you’re not, you surely are missing a lot of fun. Sometimes you have to go a little crazy to enjoy the life fully. Don’t lose your craziness. You would miss a lot of fun if you’re serious all the time, life would become a bit too boring, so stay crazy. Look at Dr. Mashoor Gulati, he’s clearly a crazy, his medical treatments are insane, but he enjoys himself. He’s so full of life and that’s what makes his character so interesting.