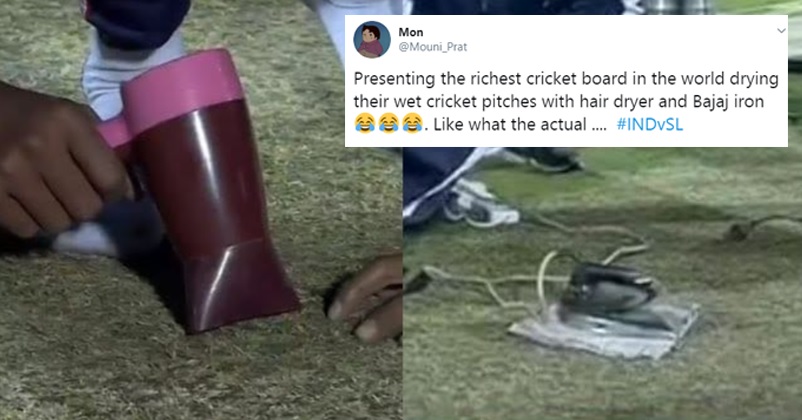 The three match T20I series between India and Sri Lanka was scheduled to start from 5 January, 2020, (Sunday) with the first match being played at Barsapara Cricket Stadium. However, it was a quite sad one for the cricket lovers as not even a single delivery was bowled due to the rain and the match was abandoned.

But what left everyone in a state of shock and surprise was that hair dryers and steam iron were used to dry off the wet or damp patches of the pitch. The pitch got wet as the covers that were used to save it from rain were leaky and water reached the pitch due to the holes in the cover. Earlier, the light roller and vacuum cleaner were also used to dry the pitch but all went in vain. 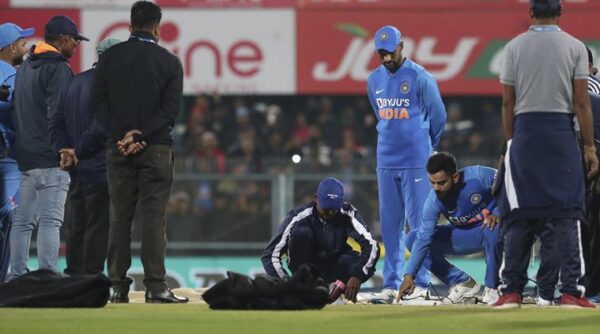 The pitch along with the outfield was inspected by the Umpires Chettithody Shamshuddin, Anil Kumar Chaudhary and Nitin Menon and they all three seemed to be quite upset with the situation. Later on, they had a little discussion with the Indian skipper Virat Kohli and Indian Head Coach Ravi Shastri and they decided to abandon the match.

Former cricketer and commentator Aakash Chopra was also not happy with the arrangements as he said that using covers with holes for the pitch was a mistake which can’t be afforded at such a high level. He was also sad for the fans who came to witness a wonderful match but had to return their homes without seeing their favourite players performing.

Really feel for the fans. Came in huge numbers. Braved the rain and the cold. Stayed there for over 4 hours. And didn’t even get a glimpse of their stars in action. That’s when it didn’t rain after 8pm and the outfield was dry. #IndvSL #Guwahati

Twitterati also slammed the cricket board and made fun of the arrangements made for an International match. Here are some of the selected tweets:

Vacuum cleaner, hairdryer, iron… every single thing from a common man's home is currently being used to dry the dampened pitch at Barsapara Stadium, Guwahati.#AssamCricketAssociation Hats off to the hard work #INDvSL #INDvsSL pic.twitter.com/PPRqTH8nzp

Presenting the richest cricket board in the world drying their wet cricket pitches with hair dryer and Bajaj iron😂😂😂. Like what the actual …. #INDvSL pic.twitter.com/1PbecFxt2g

Seriously, Are we really the richest board in the world?? When we can't afford measures to tackle these issues. Steam iron and hair dryer being used to dry the pitch… Creative yet poor measures. #INDvSL #Guwahati pic.twitter.com/sKcFquks8t

Are you serious?? Using hair dryer and iron to dry the pitch?? Looks like world's richest cricket board @BCCI never heard of "Hover Cover" to dry the pitch. We are in the year 2020 for god's sake @SGanguly99. Please spare some fund @KirenRijiju ji 🙏 #INDvsSL pic.twitter.com/EN6z1vVPOs

The lady who tried to roast chicken with hair dryer has competition!#INDvsSL pic.twitter.com/w72qWqpFBG

The richest and most powerful Cricket board in the world…

Using a hairdryer to try and dry the pitch….

Hair dryer and iron (Yes the one used for ironing clothes) deployed to dry the pitch. LOL. Unprecedented.

@BCCI Richest cricket board, & use hair dryer & iron box to dry the pitch!!
What a SHAME #BCCI !! #INDvsSL @guwahaticity pic.twitter.com/K0BsAN77q2

The level of un-professionalism at guwahati stadium is just too high, I can't believe we are using hair dryer at an international venue to dry a patch.This is so fucking horrible to see. #BCCI where's the money you're earning is going? #INDvSL #Slvsind

Ground staff man: How can we dry this pitch for the match

Virat: Well, I dry my wet clothes using an Iron or a hair dryer

Google : “A hair dryer, hairdryer or blow dryer is an electromechanical device that blows ambient or hot air over damp hair to speed the evaporation of water to dry the hair”