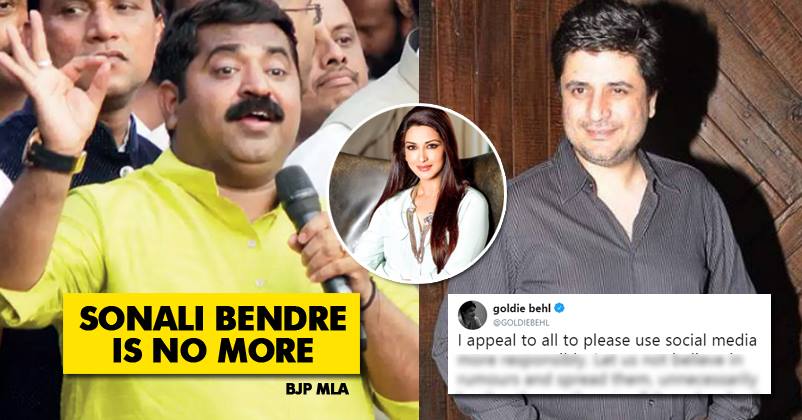 It’s a very sad fact about the internet and social media that fake news spread like wildfire. Things become worst when a fake news of someone’s de*th goes all over. It doesn’t just affect the individual but also their family.

Maharashtra BJP lawmaker Ram Kadam tweeted about Sonali Bendre losing her life to cancer and it created a panic among all her fans. He wrote-

“Sonali Bendre, the actress who ruled Hindi and Marathi cinema was to all, and is no more.”

While the news was not confirmed by anyone related to her, still people believed it because it was posted a personality. After coming to know that it was just a rumour, Ram Kadam made the things clear. He wrote again-

“About Sonali Bendre ji It was rumor. Since last two days.. I pray to God for good health and speedy recovery.”

Now Sonali’s husband has posted a tweet in which he has requested people to not believe rumours and spread it. He also asked people to use the social media responsibly. He wrote-

I appeal to all to please use social media more responsibly. Let us not believe in rumours and spread them, unnecessarily hurting the sentiments of those involved. Thank you.

I appeal to all to please use social media more responsibly. Let us not believe in rumours and spread them, unnecessarily hurting the sentiments of those involved. Thank you.

We hope people can understand and start being little more sensitive about such issues.

Continue Reading
You may also like...
Related Topics:Sonali Bendre