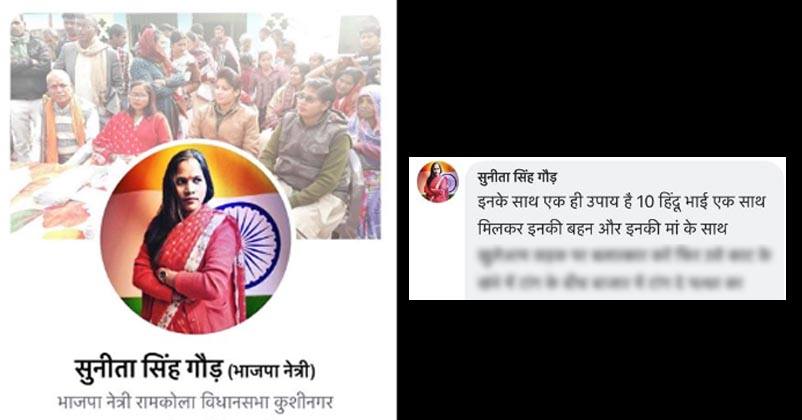 A Leader of Bhartiya Janata Party Mahila Morcha was expelled from the party for posting an inconsiderate and rousing comment on Facebook. Sunita Singh Gaud who hails from Ramkola, Uttar Pradesh, posted a comment against Muslim women on 28th June.

She wrote, “There is only one solution for them (Muslims). Hindu brothers should make a group of 10 and gang rape their (Muslims) mothers and sisters openly on the streets and then hang them in the middle of the bazaar for others to see,” in Hindi.

Her Facebook comment started an online riot and furious comments on the most used social networking site. A man even called her terrorist.

@BJP4India's Ramkola MahilaMorcha Prez #SunitaGowd calls upon #Hindu brothers & exhorts them to form a group of 10-20 other Hindu brothers & barge into every #Muslim home to rape their mothers & sisters. #Shame on all those who are misusing power to promote this vulgar ideology. pic.twitter.com/kWnP43orFJ

National President of Bharatiya Janata Party Mahila Morcha, Vijaya Rahatkar replied to her tweet. She told her that Gaud was expelled with immediate action, even before Trivedi tweeted, as “BJP Mahila Morcha will not tolerate any hateful comments whatsoever from any karyakarta.”

Be assured, BJP Mahila Morcha will not tolerate any hateful comments whatsoever from any karyakarta. The lady in question has been expelled even before you tweeted. pic.twitter.com/r4xIx6AHGG