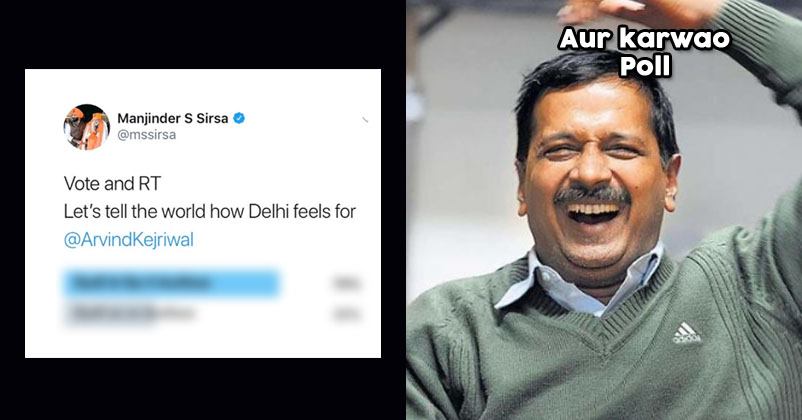 Delhi BJP politician and member of parliament Manjinder Singh Sirsa conducted an online poll on Tuesday to know what is in Delhites’ heart. The poll had two options- Kejriwal in Delhi’s heart and Kejriwal Delhi’s con. But Sirsa’s act to embarrass Kejriwal counted against him as the poll results were totally opposite to what he hoped.

70% of people voted for Kejriwal in Delhi’s heart while 30% opted for the other option.

Spokesperson and MP of Aam Aadmi Party Saurabh Bharadwaj took to Twitter to troll Sirsa and wrote, “Happy to know that BJP MP himself asked for people’s opinion on his twitter and 70% of his followers voted in the favor of Kejriwal. This means that Kejriwal is in the hearts of those people also who have voted for BJP”

When asked about the poll result, Sirsa said that Twitter users who voted are mostly AAP workers, they viral videos daily on Twitter and AAP volunteers were hired for his polls also. Sirsa added that people of Delhi have already given their opinion in Lok Sabha elections, now trolling him won’t work.

Let it be known that in 2019 Lok Sabha elections Arvind Kejriwal’s Aam Aadmi Party failed to score even one seat in Delhi and got only 18% votes. However, the party has now pulled up its sleeves for the assembly elections which will take place by the end of this year or next year.