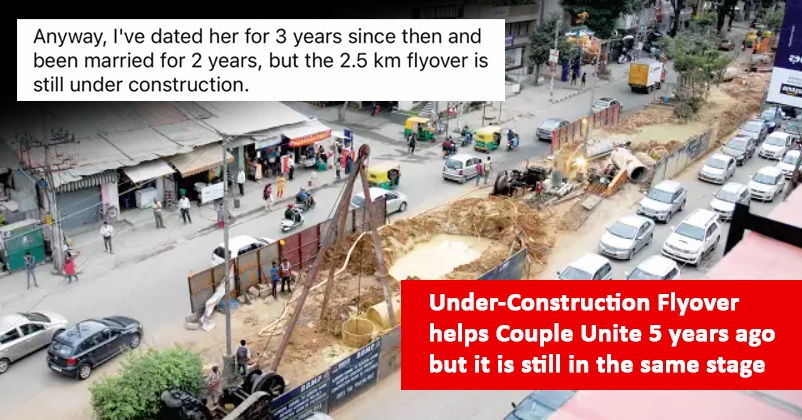 The infrastructure projects getting delayed in India is something pretty common, though the things have changed a little yet still there are many cases in which we have seen that the project remains incomplete even after deadline and budget get revised twice or thrice.

Ejipura Flyover in Bengaluru which connects the 2.5 km stretch from Sony World Junction to Kendriya Sadan started in 2017 with a deadline of 30 months but it is under-construction till the date. The project got halted for more than two years after the contractor got bankrupt and the authorities were not able to sort out the legal issues for a long time. Now the Bruhat Bengaluru Mahanagara Palike (BBMP) has floated a fresh tender for completing the project and hopefully it will be completed soon.

While such delayed projects create troubles in the lives of commuters by causing long traffic jams, slow traffic, etc., sometimes they have a positive effect as well. The under-construction Ejipura Flyover is all over the Internet as a Reddit user shared his story as per which he met his wife because of this project. He stated that he met his wife near Sony World Signal whom he knew as a friend only at that time and he was just dropping her home but they both got stuck in traffic. He added that as they were hungry, they diverted and had dinner together nearby. 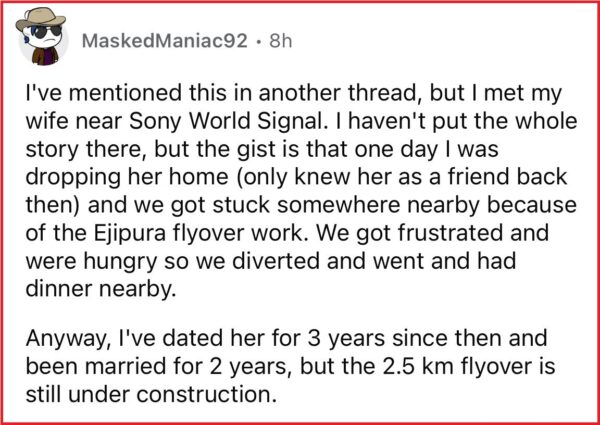 He further revealed that they dated for three years and for two years now, they are married but this 2.5 km flyover is still not completed. A Twitter user shared the post from Reddit on the micro-blogging site:

Can relate. That flyover is under construction for all the time I've been in Bangalore.

Things that can happen only in Bangalore!!

No, not the love story but the forever under-construction flyovers.

Had experienced a similar fate of Domlur flyover, guess that road is jinxed https://t.co/NOUYiSmHAt

Bangalore traffic is a blessing you just don't realize it. https://t.co/pAq47seFTC

Their kids will be born and go to school but still the Ejipura flyover will be incomplete. https://t.co/NXyCpBtePz

Pls note the user we can ask about his kids schools.. even then it will not be done

This!
Traffic jams in #Bangalore do have some positive side to it:)
#startup #tech @UnboxingBlr https://t.co/zcI8fZ3VEF

that is nothing, a road here was under repair for over a decade. I finished school, college and few year into my job when it got fully repaired and re-laid.

Bangalorians be like : leave the city of you can not have enough patience to wait till it gets build.

What a beautiful story 🤩😂😂

Do they still get stuck on purpose so a date happens? Coz things change once married lol

Well, if this flyover doesn’t get completed for 2-3 years more, we may get to hear some more love stories! What do you think?