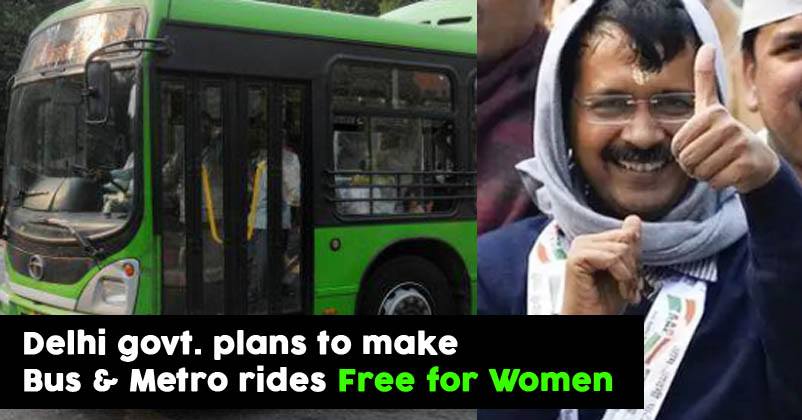 Delhi government is planning to make Delhi metro and bus rides free for female passengers, say reports. Reportedly, the Aam Aadmi Party government is making plans to make commuting free for all females. And all the loss faced by Delhi Metro Rail Corporation (DMRC) and Delhi Transport Corporation (DTC) will be covered by the government.

A government official also stated that reportedly the State Transport Minister, Kailash Gehlot met with senior executives of DMRC to review how much would it cost.

Making bus rides free for women will be easy but the Delhi metro has no provision to allow anyone with concessional passes. However, to move this plan into motion a lot of technical changes will have to be done which will cost a lot.

While the step could be huge but it doesn’t seem right to the twitterians including females and that is why some called it a trick to win votes for the upcoming assembly elections.

Mr Kejriwal please no freebies in d name of empowerment. Stop treating us as vote banks. This country has suffered enough coz of vote bank politics #ArvindKejriwal

Buses, Metro may be free for women in Delhi | Delhi News – Times of India https://t.co/TvbqK520xY

We women don't want such freebies, it feels derogatory. Whatever happened to equality🙄

It is not a good idea. Rather Delhi Govt can provide subsidised tickets, may be upto 30%, to ladies and students( boys and girls) upto graduation level. https://t.co/eBBN5DzwbQ

It is expensive to maintain Metro, best is to offer discount and more security.They are working women , not poor, they expect safe travel,more important – https://t.co/lQXANQPQY7

But why? We talk of equality and not charity because we are bechari aurat. Instead , we will appreciate if you thought of making these rides safe for women

And the logic behind it? https://t.co/BXHCGmZlmg

Free rides for women in metro and buses can be worse for Delhi in 2020. People don't want freebies. It will backfire. @kgahlot @ArvindKejriwal @AAPExpress

@ArvindKejriwal , Dear Mr CM, most of women commuters earn more than men and usually they are 2nd earning member of family while men at times are only earning member for their family. So it doesn't make sense to give blanket waiver on the basis of gender.

Seems like Delhites are fed up of the free stuff promises made by Arvind Kejriwal, as once he promised free wifi in Delhi which is yet to be fulfilled.